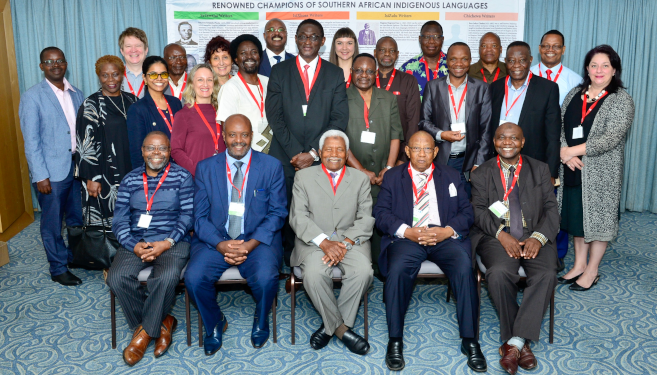 Delegates at the stakeholders’ meeting to promote the teaching and learning of African indigenous languages.

The DSI-NRF Centre in Indigenous Knowledge Systems (CIKS) hosted a two-day stakeholders’ meeting to promote the use of African multilingualism in teaching and learning, African indigenous languages and African home-grown philosophies.

The Centre is a partnership among five Higher Education Institutions, namely, UKZN which serves as the hub; the University of South Africa; the Universities of Limpopo and Venda; and the North West University.

The initiative aims to promote the use of African indigenous languages and home-grown philosophies to domesticate and achieve the 2030 Sustainable Development Goals (SDGs) for the “Africa We Want” (African Union Agenda 2063), in the Southern African Development Community (SADC). The meeting which was attended by national and international delegates, was honoured by the presence of the former President of the United Republic of Tanzania, His Excellency Ali Hassan Mwinyi.

Deputy Vice-Chancellor for Teaching and Learning at UKZN, Professor Sandile Songca welcomed stakeholders and thanked them for their contribution to the launch of an important African initiative. He highlighted the importance of Indigenous Knowledge Systems (IKS) and languages in research, teaching and community engagement and noted that UKZN is one of the few universities in the world with an institutional IKS policy that promotes, preserves and protects local knowledge systems and indigenous languages in the global knowledge economy.

Songca underlined the challenges faced by African students due to the African education system’s failure to teach in indigenous languages. ‘Africa is rich, not only in natural resources but also indigenous languages and home-grown philosophies. Our diverse and dynamic indigenous knowledge systems and language heritage should be harnessed as a major resource for African local communities to actively participate in the knowledge economy and spearhead sustainable development within their local communities, on their terms,’ he said.

Mwinyi noted that, after Tanzania gained its independence, the late former President Mwalimu Julius Nyerere promoted Kiswahili as the national language in order to ensure that the country’s more than 120 ethnic groups could communicate with one another. ‘We are gathered here today with the aim of helping people speak and understand, not only Kiswahili, but other African indigenous languages. We need to put our ideas together, so we know where to start and what methods can be used to achieve this,’ he said.

Mwinyi added that he was privileged to be a patron of the initiative. He appealed to the public and private sectors within and outside Africa to support its implementation and activities.

Kaya also requested Mwinyi to call on other African leaders to support the initiative. He listed a number of activities that would be undertaken, including: