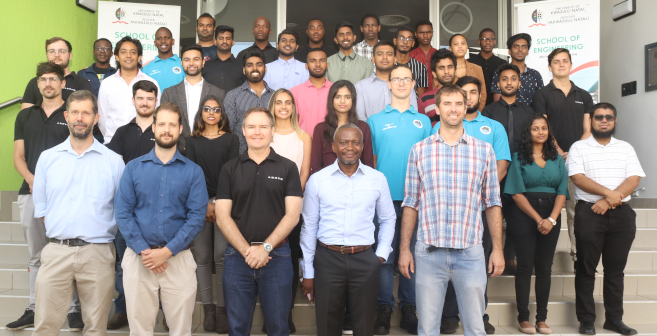 You Can Become a Rocket Scientist Through UKZN!

UKZN is offering its undergraduate students the opportunity to study Rocket Engineering in their fourth-year by taking a new module on Rocket Propulsion.

‘This is a unique offering in South Africa,’ said Academic Leader of Mechanical Engineering at UKZN Professor Mike Brooks. ‘Only UKZN offers a Rocket Propulsion module at undergraduate level, and the students who take the course are passionate about Aerospace Engineering.’

ASReG recently secured more than R15 million in funding from the Department of Science and Innovation (DSI) for its work on the SAFFIRE and Phoenix programmes.

The SAFFIRE programme aims to develop South Africa’s first commercial liquid rocket engine to enable the launch of microsatellites into orbit from South African soil. The Phoenix programme focuses on the development of sub-orbital rockets for technology testing and demonstration purposes, while ASReG draws inspiration from the “NewSpace” movement, which has pioneered a host of new, low-cost commercial rockets revolutionising the global launch market.

‘Over the past decade satellites have become more powerful, but also much smaller,’ said Brooks.

‘This has driven the development of smaller, cheaper rockets to launch microsats into orbit. We are living in a new space race and see a great market opportunity for South Africa to join the industry and develop its own indigenous space launch programme as well as for the African continent.

‘ASReG has been in existence for over a decade now and as it has grown the group’s mission has been sharpened to focus on developing rocket propulsion technology and human capital that can enable space access for South Africa, and the African continent as a whole,’ said the leader of ASReG, Dr Jean Pitot. ‘We’re proud of the technological milestones we’ve achieved during this journey, and we’re particularly excited about what the future holds for the group. 2020 will be a big year for ASReG, as we seek to conduct the first test of an indigenously developed liquid rocket engine and the launch of two hybrid sounding rockets at the Denel Overberg Test Range towards the end of the year.’

Apart from its research work, ASReG is heavily focused on the development of aerospace engineers. Most of ASReG’s postgraduate students are fully funded through entities such as the Department of Science and Innovation, Armscor and the South African Space Agency (SANSA). Past graduates have gone on to work for companies in the aerospace sector, including Rheinmetall Denel Munition, Denel Dynamics, Aerosud, Armscor, and a host of other high-tech entities.

ASReG’s success has impacted the Mechanical Engineering programme and this year the Discipline began offering its undergraduate students the opportunity to study Rocket Engineering in their fourth-year by taking a new module on rocket propulsion.