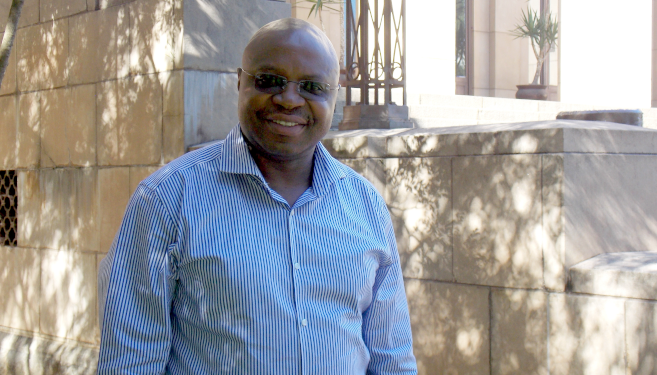 UKZN’s School of Agricultural, Earth and Environmental Sciences (SAEES) has a new Dean and Head - Professor Fhatuwani Nixwell Mudau, an expert in Horticultural Science who has distinguished himself both in business and in academia.

Mudau hails from the Limpopo province where he completed his Bachelor of Science in Agriculture degree at the University of Venda, specialising in Crop Science, inspired by the agricultural activity in the subtropical region in which he grew up. He joined an undergraduate class of only six people, who split their focus among several agricultural areas.

His MSc research involved investigating the yield and fruit quality of citrus species relative to foliar sprays of macronutrients under the supervision of Professor Etienne Rabe and Professor Karen Theron.

At UL, Mudau was involved in the establishment of the Limpopo Agro-Food Technology Station (LATS) created to improve agro-processing by small, medium and micro-sized enterprises (SMMEs). Mudau worked in this strategic role for two years, publishing extensively and earning a promotion to Associate Professor.

He then joined the Industrial Development Corporation (IDC), working in agro-processing and agriculture and the Healthcare and Pharmaceuticals Strategic Business Units, while still continuing to supervise students at UL. The transition from academia to a more business-based role led Mudau to enrol for a Master of Business Leadership (MBL) through the Graduate School of Business Leadership (SBL) at the University of South Africa (UNISA).

After five years at the IDC, and now a father of two, Mudau joined UNISA, bringing with him a new perspective on both business and academia. He completed his MBL, which enhanced his understanding of issues of leadership, strategy, corporate finance, human resources and funding that underpin the success of an organisation.

A year after joining UNISA, the position of Chair of the Department of Agriculture and Animal Health opened up, and believing that ‘if you don’t want to manage, you might be managed badly’ and if ‘you don’t want to lead, you will be badly led’, Mudau took up the position which he held for more than six years. This involved oversight of a large department comprising all agricultural disciplines.

At UNISA, Mudau also acted as Deputy Executive Dean for six months, and was Director of the School of Agriculture and Life Sciences for five months before joining UKZN. He is a National Research Foundation C-rated scientist.

Mudau was motivated to join UKZN by its reputation as one of the country’s top agricultural universities.

In this new role, Mudau looks forward to building on the School’s strengths in research, teaching and learning, and community engagement, as well as its robust administrative systems. He is particularly interested in integrating teaching and learning with community engagement to achieve societal transformation. He believes his strengths in issues of governance will contribute to the School, and sees the input of strategic leadership as essential.

Mudau has continued his work on bush tea, from production to quality to chemical analysis, a field in which he has published extensively. A significant achievement in his research included characterising, for the first time, a major new flavonoid in bush tea leaves.

Mudau has received several awards, including the UNISA Chancellor Prize for excellence in research, five best paper awards from the Gauteng Department of Agriculture and Rural Development, and a Combined Congress floating trophy for best poster. He was also a finalist for two National Science and Technology Forum awards and for a New Generation of Academics Programme Bio Sciences award.