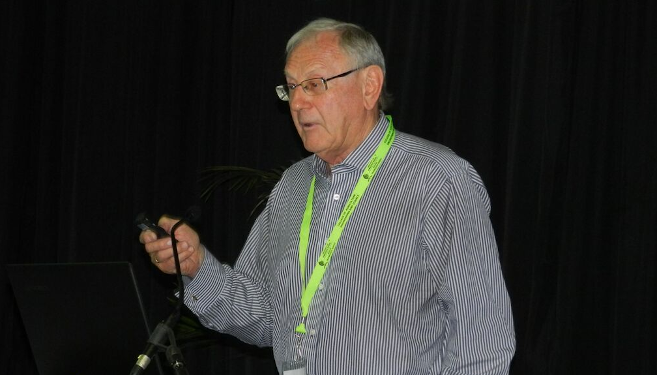 Expert in hydrology and climate change Emeritus Professor Roland Schulze, whose career has spanned more than five decades and earned him numerous accolades, is featured in the July/August edition of the Water Research Commission’s (WRC) Water Wheel magazine.

Schulze, who grew up in KwaZulu-Natal’s German community, studied Physical Geography and Chemistry at the then University of Natal, progressing to masters level and then lecturing Physical Geography at the University from 1969. In the same year, a book by Professor Roy Ward titled Principles of Hydrology, motivated him to study further on the topic. The establishment of the WRC in the 1970s provided a facility for funding Schulze’s research on small water catchments and later studies on a larger scale.

As he gained experience in the field of Hydrology, Schulze proposed the creation of a specialist Hydrology degree at the University of Natal, which became the first university in the country to offer the qualification. From a one-man effort, the Discipline of Hydrology at UKZN has grown to include a full-time staff of seven plus several part-time lecturers and postgraduate students.

Another major contribution of his was the development of the Agricultural Catchments Research Unit hydrological model which has been used for land impact studies as well as for modelling the potential impact of elevated carbon dioxide and temperature levels, and examining the shifts in water resources and maize production in southern Africa due to global climate change. The model has been applied to research in Zimbabwe, Eritrea, New Zealand, Chile, the United States, Canada, and South Africa.

The magazine feature details Schulze’s major concerns with current water consumption patterns in water-scarce South Africa which are the need to retain water expertise in the country and to price water correctly to encourage water conservation.

Schulze began turning his focus to climate change in the 1980s, being recognised as a pioneer in the field in South Africa. He has won national and international recognition for his work in both water conservation and climate change - in 2013 a nationwide survey voted him South Africa’s top water researcher, and in 2018 he received a Lifetime Achievement Award at the African Utilities Industry Awards ceremony.

He was also inducted as a member of the Academy of Science of South Africa in 2009, and appointed a Fellow of the University of Natal in 1991.

Schulze has worked with the United Nations’ Intergovernmental Panel on Climate Change, and over the course of his academic career spent several sabbaticals at institutions in the United Kingdom, the United States and Europe.

Despite retiring over a decade ago, Schulze has continued to work with staff and students at UKZN, and is currently involved on projects in the fruit, macadamia and sugar industries. He is also working on projects with Stellenbosch University, the WRC, eThekwini Municipality, and the Western Cape provincial government.

Schulze has published more than 140 refereed journal papers, over 100 consulting reports and has supervised nearly 90 MSc and PhD students.

Outside of academia, Schulze is a committed member of the Lutheran Church, has been married to his wife Waltraut for 52 years, and is father of two and a grandfather of seven!