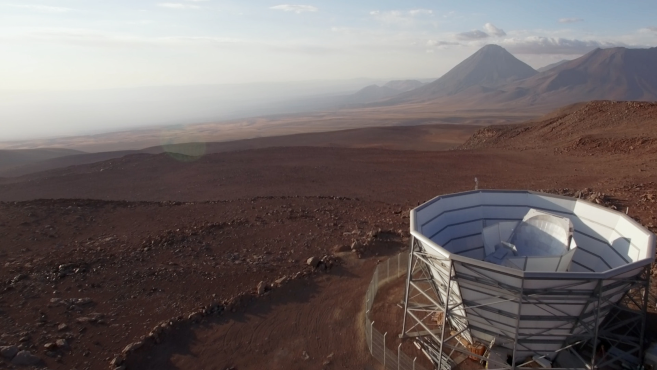 The Atacama Cosmology Telescope measures the oldest light in the universe, known as the cosmic microwave background. Using those measurements, scientists can calculate the universe’s age.

Researchers from UKZN’s Astrophysics Research Centre (ARC) have contributed to an international collaborative study* that is taking a renewed look at the oldest light in the universe, suggesting that the universe is approximately 13.77 billion years old.

Professors Matt Hilton and Kavilan Moodley from the ARC are contributors to the research led by astronomers with the United States’ National Science Foundation’s (NSF) Atacama Cosmology Telescope (ACT), perched on a mountain in Chile’s Atacama Desert.

Hilton touched on the disagreements between these methods of determining the age and current rate of expansion of the universe, saying that the fact that this result drawn from completely independent measurements of the oldest light in the universe found the same expansion rate provides confidence that there is not a systematic error in these types of measurements.

‘This could point to an unidentified problem with measurements of the expansion rate from observing the nearby universe, or it could be that both types of measurement are in fact correct - which would mean that there is something missing in our understanding of how the universe evolves,’ said Hilton.

Both the Planck satellite and the ACT observe cosmic microwave background (CMB), the “afterglow” of the Big Bang. To calculate the age of the universe, scientists attempt the challenging task of estimating how far light from the CMB travelled to reach Earth using cosmic geometry. Their measurements take into account subtle variations in temperature and light polarisation in the CMB’s glow, and the ACT team measured the CMB fluctuations with unprecedented resolution. Their continued observations will provide an ever-clearer picture of the CMB and a more exact idea of how long ago the cosmos began.

In their observations, scientists are also looking for signs of physics that do not match the standard cosmological model, which could resolve the disagreement between the predictions of the age and expansion rate of the universe arising from the measurements of the CMB and the motions of galaxies.

UKZN plays an essential role in this collaboration through its contribution to characterising the telescope’s on-sky response, and in providing the software used to find astrophysical sources and galaxy clusters in the ACT maps. Hippo, UKZN’s high performance computing facility, was used for some aspects of the ACT analysis. Researchers at the ARC, including a number of postgraduate students and postdoctoral researchers supported by the National Research Foundation, are using South Africa’s MeerKAT and SALT telescopes to conduct follow-up studies of galaxy clusters detected in the ACT sky maps.