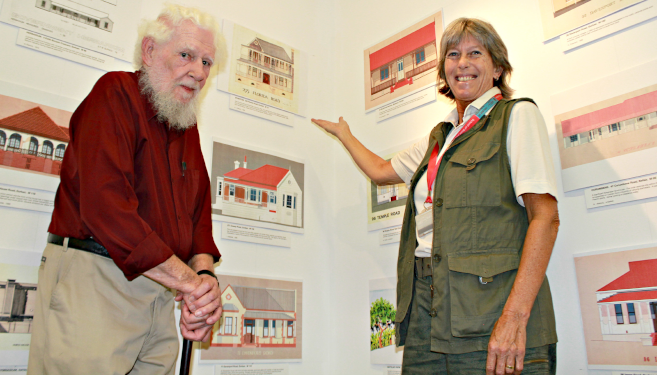 Professor Brian Kearney and Ms Michele Jacobs with some of the drawings and work from the UKZN Architecture archives that feature in The Berea Style publication.

UKZN Architecture Drawings and Work Feature in The Berea Style

Curator of the UKZN Architecture library archives, Ms Michele Jacobs, and Emeritus Professor in the Architecture Discipline, Brian Kearney, recently exhibited prints of original and measured drawings of a vast array of KwaZulu-Natal buildings done by UKZN students and other architects.

The exhibition: Drawing from the Past, was held at the KwaZulu-Natal Institute for Architecture (KZNIA) in Glenwood. It was organised by the Durban Heritage Trust to showcase important buildings in Durban.

The Trust is also responsible for encouraging and sponsoring publications about historic architecture.

Jacobs, Kearney and Mr Rodney Harber, edited one such publication, titled Measured drawings of Natal buildings by students of the Natal School of Architecture.

‘This publication puts together for the first time the fine measured drawings of local buildings by three decades of Architectural students from the Natal School of Architecture and brings together exciting images of a unique Natal building legacy,’ said Jacobs. ‘It provides a basis for discussion on the social and physical ways in which such buildings developed and were used. It is also a vital record of buildings of historical value to researchers and historians.’

Jacobs and Kearney edited another publication titled, The Street Wilson Drawing Collection which is probably the most important set of architectural drawings of the period in South Africa.

‘This publication includes about 700 drawings of houses, villas and cottages; churches and institutions; hotels and bars; shops and offices and industrial buildings,’ said Kearney. ‘These represent the work of William Street Wilson and his partners in South Africa between 1889 and 1928 as well as that of Phillip Dudgeon and the earlier houses of Street Wilson in Bedford Park, London. The consistent hallmarks of these works were gables, verandas, and arts and crafts ideas strongly influenced by English vernacular architecture.’

Their latest publication The Berea Style - The architecture of William Murray-Jones and Arthur Ritchie MacKinlay is made up of drawings, primarily housed in the Technical Reference Library of the Barrie Biermann Architecture Library at UKZN. Some were copied in 1984 from the archive of the Durban City Architects.

Copies of these publications can be purchased from Brian Kearney via rebt@telkomsa.net or Michele Jacobs jacobsm1@ukzn.ac.za.