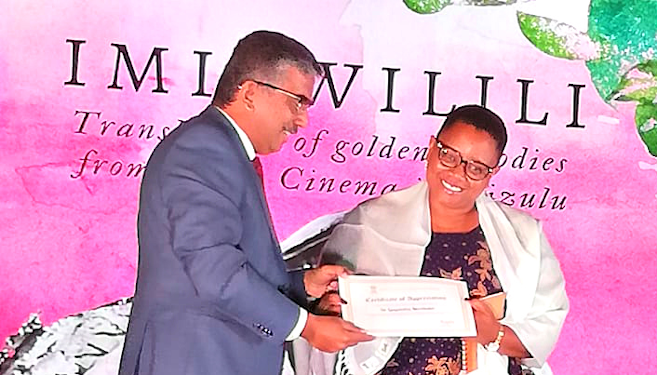 Dr Gugulethu Mazibuko is congratulated by the Consulate General of India, Mr Anish Raja, for her book: Imizwilili.

‘Bollywood music is a firm favourite on the global platform. The motivation for translating these movie songs into isiZulu was to build and cross cultural bridges,’ said Mazibuko. The Indian Consulate General in Durban, the Swami Vivekananda Cultural Centre and the Hindi Shiksha Sangh (SA) approached her to contribute to this joint project.

‘In a province where isiZulu is the most widely spoken language, it is important to share Indian culture and values through music. This project is important in nation building and social cohesion by bringing communities together through music and films,’ added Mazibuko. ‘Literature and other art forms transcend all barriers and create a universal language. This book aims to act as a bridge between cultures and enhance appreciation of the Hindi language as well as the rich culture of India,’ she said.

The selection of songs covers a wide range of themes such as love, loss, family bonds, survival, faith, triumph and appreciation of nature.

Mazibuko said that translating the songs was fascinating, especially as an isiZulu speaker. ‘I had to make sure that Indian culture is not lost in translation. This exercise enhanced my translation skills and I am grateful for the opportunity. As a heritage and culture scholar, it inspired me to conduct comparative analysis of Hindu and Zulu culture through songs.’

The book is available free of charge from the Indian Consulate in Durban.