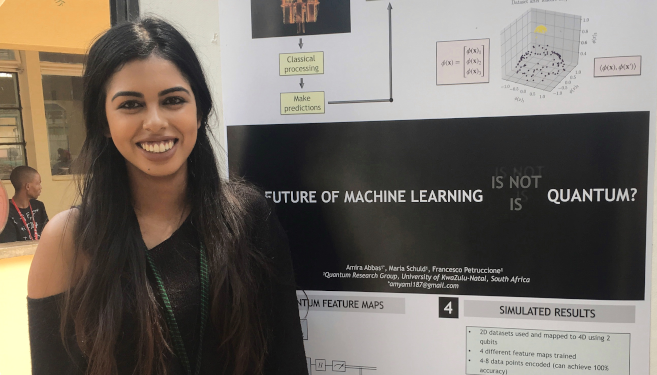 PhD candidate in the Centre for Quantum Technology at UKZN, Ms Amira Abbas has been featured in ITWeb’s Brainstorm magazine discussing the role of quantum computing in financial applications.

Abbas is currently exploring quantum neural networks and finance applications at IBM’s quantum computing research lab in Switzerland as part of her PhD research into new financial instruments that could arise from quantum computing.

Quantum computers, capable of executing advanced calculations, could improve several industries from medicine to logistics, but the financial sector is a major arena where quantum computing could revolutionise operations.

Abbas has been conducting research into how the power of quantum computers could be harnessed to aid financial applications, playing into the field of research on quantum finance that is being advanced by major global financial institutions.

In the interview with ITWeb, Abbas said optimisation was an important aspect in enhancing financial transactions, with many areas requiring optimisation or speeding up. Quantum computing, as opposed to classical computing, achieves this by using less time and fewer resources to achieve feats such as sampling movements of stock plotted in complicated models.

With the qualities of quantum computers far outstripping those of classical computers, Abbas says researchers and analysts will soon be able to scrutinise far more complex interactions, an important advance in the finance world where there are myriad variables interacting with one another, for example in the stock exchange arena. Organisations such as IBM have already demonstrated the ability of quantum algorithms to calculate certain metrics in finance more quickly than classical algorithms, using quantum devices, promising far more efficient financial modelling endeavours.

Abbas also addressed the role of the quantum phenomenon known as superposition in the encoding of data in quantum computers, explaining that this enables quantum computers to use quantum algorithms to search through unstructured databases quicker than a classical computer. Information can be stored on quantum computers in smaller bits, called quantum bits or qubits, using less space. The storage and search capabilities of quantum computers will enable quicker detection of fraud and anomalies in financial technologies as quantum computing improves ML techniques used for identification of historical patterns.

Abbas said other opportunities for quantum finance to take advantage of as ML and quantum hardware improved included better analysis of large datasets and enhanced modelling for risk diversification.