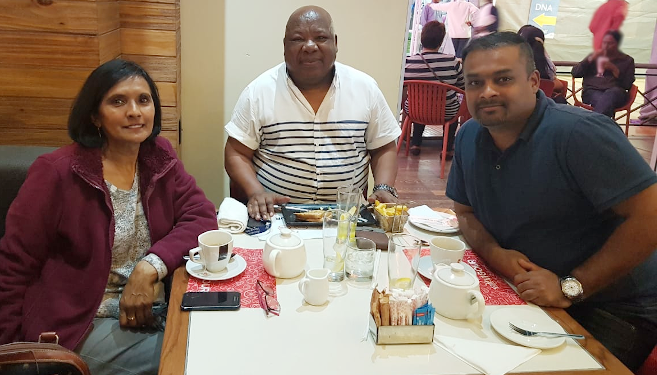 A Doctoral Journey Across Four Continents

The journey my professor and I shared during my doctoral studies at UKZN was no less exciting than a voyage on a sailboat across the oceans. Like any experienced sailor, I started with confidence and self-belief in my skills and experience. Little did I know that the voyage would span four continents! While I was at the mercy of the weather, the team, resources and above all destiny, I never gave up.

Some four years after graduating with an MBA, I came across an advertisement in a national newspaper calling for applications from interested candidates for the PhD in Administration at UKZN. By then I had approximately 18 years’ work experience and was working in a management position in a public sector organisation in Durban.

I was elated to be accepted as a doctoral student and a formal meeting was scheduled with Professor Yogi Penceliah. I will never forget our first meeting, which was a wonderful beginning. She stipulated her expectations and enquired about mine as well as my intended timeframe for completion.

My proposal was accepted and within a few weeks I received ethical clearance. I started my research with confidence and enthusiasm. Professor Yogi and I presented a paper at a national conference of the Association of Southern African Schools and Departments of Public Administration and Management (ASSADPAM) the same year. I worked hard to collect information with the hope of submitting my final thesis by July 2013.

My first submission was the Literature Review. She responded promptly and returned the hard copy with her comments. Reality hit when I received the feedback… It was a disaster; neither the language nor the content satisfied Professor Yogi who expected nothing less than 100%. The next challenge was to identify a suitable language practitioner. Surfing the web, I came across a few self-proclaimed “language practitioners” and chose the one I judged to be a good fit only to be proven wrong by my supervisor. Her remarks were no longer kind; she meant business. This was a huge setback.

I was not a full-time student, and was also focusing on my work and my family, including my four-year-old child. I could not progress without completing the literature review. The stumbling block was my lack of understanding of “good literature”. I tried three or four language practitioners but none could deliver on time or meet my professor’s expectations. I felt like a sailor stranded on an island in the middle of the ocean with no resources to complete the voyage.

In January 2014, my job took my family and I to the United Arab Emirates (UAE). In a new job at a new place, I needed time to find my bearings. Professor Yogi was understanding and motivated for a deferment for two years. I was able to collect the primary data electronically and conducted face-to-face interviews during my trips to South Africa between 2014 and 2018. Paris Sorbonne University, UAE allowed me access to their library and I was able to successfully progress through my chapters.

I met with Professor Yogi on a trip to South Africa in 2018. She was surprised that I did not bring my work with me. I told her that I felt I was wasting her time and should withdraw.

Professor Yogi remained calm and organised a meeting with the late Dr Bongani Mtshali, one of her students who had just submitted his doctoral thesis for examination, so that I could understand his journey. He travelled all the way from Richards Bay to meet me. He shared that he also experienced challenges with his research and realised that he had to be more dedicated. He found a language practitioner who could meet Professor Yogi’s expectations and shared their contact details and those of the data analyst that he used. He persuaded me not to give up. Dr Mtshali, who graduated posthumously in April 2019, helped me to see the light at the end of the tunnel.

Destiny had other plans for me. My contract in the UAE came to an end at the beginning of 2019 and I accepted a job offer in the United Kingdom. The gap between jobs enabled me to focus on my research and I submitted the first draft of my thesis in February 2019. After the third review, I was given permission to submit it for examination in May 2019.

The PhD journey was a great learning experience. I was blessed to have a supervisor with experience, knowledge, dedication and perseverance to guide me through the process. If I was the captain of the boat, my professor was the compass who directed me towards the destination.

I salute my professor, the guru, guide, and commander without whom I would never have completed this journey. While she did not agree to my dedicating the thesis to her, I take this opportunity to do so.

Dr Sivashankar Sreenivasan is a professional with over 26 years of international work experience in the maritime industry. He is currently based in the Isle of Man and holds position as the Group Head of Shipping within a global grain trading organisation. His research interest are in the area of governance.