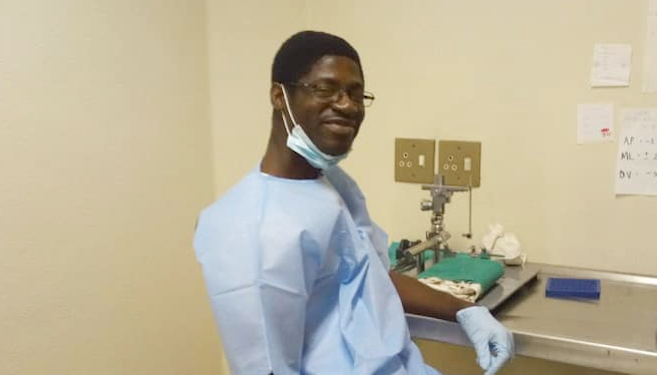 Dr Adu Temitope Samson was awarded a PhD in Physiology for his study on an alternative, effective and cheaper method to manage Parkinson’s disease.

Parkinson’s disease is a movement disorder characterised by the degeneration of the dopaminergic system and manifests through muscle rigidity, involuntary tremor and dyskinesia. Samson’s study investigated whether it could be managed by an anti-inflammatory drug. The results indicated a significant improvement following drug administration but no change in the dopaminergic system; however, systemic inflammation as well neuroinflammation were significantly reduced.

Although this is not a novel study, it is the first time that stereotaxic brain surgery was successfully used as a model at UKZN. The model has been shared with other students in the Discipline of Physiology.

The Nigerian born academic completed his Master’s degree in Physiology at the University of Ibadan before pursuing his PhD at UKZN.

‘I have mixed feelings of excitement and sadness. I am excited because of the successful completion of the research and sad as a result of challenges encountered,’ he said.

‘Using an animal model to test and model Parkinson’s disease was a challenge as I encountered a 0% survival rate with the stereotaxic brain surgery performed during my pilot study.’

Following on-going consultation of related online articles as well as professional input from his supervisor, Professor Musa Mabandla and the former Head of the Biomedical Research Unit at UKZN, Dr Sanil Singh, he eventually succeeded in performing the first-ever reproducible stereotaxic brain surgery in the scientific history of UKZN.

Another challenge was obtaining a licence from the South African Veterinary Council (SAVC). ‘The cost of registration was expensive and the time of training was also longer than expected; however, I now have both the SAVC licence and my doctoral degree,’ said an excited Samson. He is currently employed at the Obafemi Awolowo University, Nigeria and is preparing for post-doctoral studies.