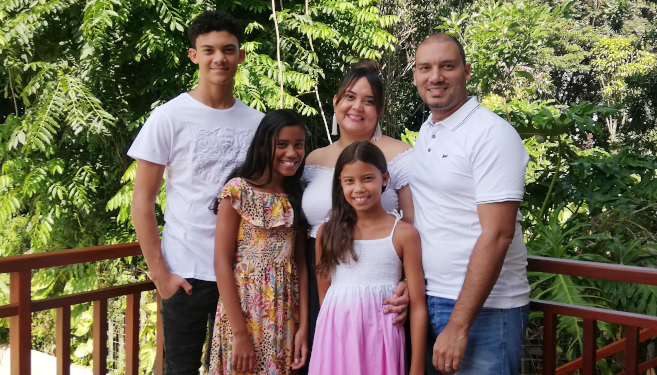 Dr Stacy Maddocks-Lawler enjoying time with her family during the COVID-19 national lockdown.

At the age of 14, Dr Stacy Maddocks-Lawler decided to pursue a career in Physiotherapy after being inspired by her late mum the night before she passed away, to consider this health profession.

Many years later, the mother of three who lectures Physiotherapy at UKZN, has graduated with a doctoral degree for her study on Designing a model of care for the rehabilitation of children living with HIV (CLHIV) in a semi-rural setting in KwaZulu-Natal, South Africa.

South Africa has the biggest and most high-profile HIV epidemic in the world, with an estimated 7.7 million people living with HIV in 2018. In the same year, there were 260 000 CLHIV in the country. KwaZulu-Natal remains the province with the highest number of people living with HIV with a recorded 2.1 million in 2018. These statistics paint a grim picture for the province and especially for the most vulnerable population, children.

Maddocks-Lawler’s study aimed to develop a model of care that addresses the rehabilitation needs of CLHIV within a resource-constrained setting and was conducted in a health facility on the outskirts of the greater eThekwini area. Participants included care givers, educators, and parents as well as a multi-disciplinary team of medical doctors, nurses, social workers, dieticians, psychologists, optometrists, an audiologist, speech and language pathologists, physiotherapists, occupational therapists and a biokineticist.

‘I want to make a tangible difference in the lives of children living with HIV. The need for healthcare services in this area is overwhelming. Together with my supervisors, Professor Verusia Chetty and Dr Saul Cobbing, we have devised a plan of action for implementation to effect improvements in identifying and treating disability in CLHIV in the community. Rehabilitation in the context of HIV is a neglected component of care,’ said Maddocks-Lawler.

Maddocks-Lawler’s proposed model of care includes a framework for identification, referral and rehabilitation of CLHIV with disabilities based on distinct settings including the home, the school, the clinic, the hospital and within community structures. The model includes wide scale screening based on the Washington Group/UNICEF Module on Child Functioning which is a screening tool used to identify HIV-related functional difficulties such as hearing, mobility, vision, learning and communication in people from ages 2-17.

Maddocks-Lawler grew up in the Sydenham/Overport area in Durban and completed high school at Sparks Estate Senior Secondary School. ‘I am married to the love of my life, Marvin Maddocks, my childhood sweetheart and we have three children aged 14, 11 and 9. Apart from the grace of God, my incredibly devoted supervisors, and supportive colleagues, my family played the most essential role in making my PhD study a success. My husband in particular is the champion of my success. He shouldered the burden of playing the role of both mum and dad within the last two years and my gratitude to him cannot be expressed,’ said Maddocks-Lawler.