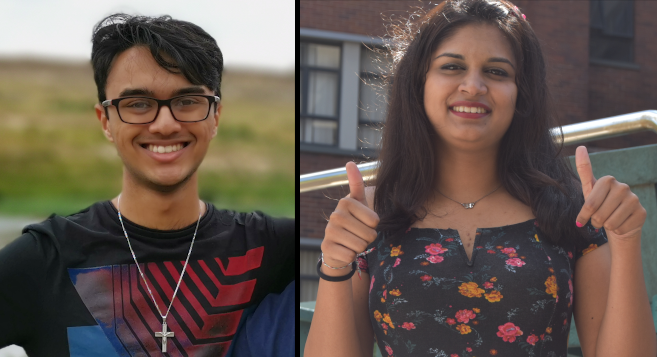 KwaZulu-Natal’s top two achievers in the 2019 NSC matric exams have placed their faith in UKZN.

Mr Aaron Naidu has registered for a BSc degree majoring in Data Science, whilst Ms Shweta Harilal will be studying towards her MBChB (Medicine). The pair is part of 136 first entry undergraduates who achieved seven or more As in their final matric exams to make UKZN their university of choice this year.

Harilal was the top NSC candidate from KZN public schools, whilst Naidu was the top NSC achiever from KZN independent schools - he also came first in the province overall and second in South Africa.

Harilal joined the “University of Choice” to study Medicine as her dream has always been to help others. Her mother, Mrs Sunitha Harilal, said from a very young age, her daughter would give injections to her dolls and act as a doctor. As parents, they encouraged her to work hard so that she would qualify for medical school.

Said Harilal: ‘I am very excited to be joining UKZN. I chose this university because it’s closer to home and has the best facilities that any Medical student could hope for. I couldn’t have chosen better. I am grateful to God for enabling me to fulfil my dream of studying Medicine. I’m also grateful to my family and my parents, Sunitha and Rajesh Harilal, for their support and encouragement. They are my pillars of strength.’

The 18-year-old who attended Durban North College, achieved seven distinctions and still cannot believe that of the 116 937 grade 12 government school pupils who sat for the 2019 NSC exams in KZN, she received the highest marks – with 96% in Core Maths, 95% in Life Sciences, 97% for Accounting, 97% in Afrikaans, 94% for English, 99% in Physics, and 90% for Life Orientation. She says her recipe for success was simply ‘long hours dedicated to studying and practicing Maths over and over again. Anyone can do it. It’s possible,’ she said.

Dean and Head of the School of Clinical Medicine at UKZN, Professor Ncoza Dlova, said: ‘We pride ourselves on being an Institution of Choice for many high flyers like Shweta. UKZN was recently ranked number one in Africa on the prestigious Times Higher Education Young University Rankings which lists the world’s best universities. This shows how serious we are when it comes to academic and research excellence.’

Whilst Harilal has opted for the Health Sciences, super achiever Mr Aaron Naidu always knew that Mathematics was his area of choice. With a 100% score for Core Maths in the NSC matric exam and 99% for Advanced Programme (AP) Mathematics (written through the IEB), his decision to register for a BSc majoring in Data Science was easy.

Naidu obtained an overall matric aggregate of 96.71% and a total of nine As. In addition to Core Maths and AP Maths, his other marks were 96% for Accounting, 92% for English, 98% for Information Technology, 99% for Life Orientation, 94% for Life Sciences, 94% for Afrikaans, and 98% for Physical Sciences.

Dean and Head of the School of Mathematics, Statistics and Computer Science, Professor Delia North, was delighted to receive Naidu. ‘I have deliberately worked to attract a core group of top performers to UKZN and to Data Science in particular. The VC of UCT phoned Aaron to try and persuade him to go there, so I am overjoyed that he has decided to come study with us. We have excellent staff who will support and extend him all the way,’ she said.

Naidu is no stranger to UKZN, as he has been a member of the Siyanqoba Mathematics Extension Programme since 2014. This project, run under the auspices of Emeritus Professor Poobhalan Pillay, provides extension and training to top mathematical performers competing in the South African Mathematics Olympiad (SAMO).

Last year (2019) Naidu – who in 2014 represented South Africa at the World Youth Chess Championships – not only won the SAMO for a record third time, beating 90 000 pupils from across the county, but also won the Tertiary Mathematics Olympiad where he beat all competing university students, even though he was still at high school. He also represented South Africa at the International Mathematics Olympiad where he received a Bronze Medal, and received silver medals in the Computer Programming and Physics Olympiads.

Naidu said he loves mathematics not only because he is good at it, but because it is the foundation for many different fields. He attributed part of his success to his grandmother. ‘When I was young my grandmother, who was a retired primary school teacher, taught me multiplication tables, basic addition and subtraction. By the time I got to school, I was already proficient,’ he said.

Naidu praised his parents for their support, guidance and encouragement. ‘They were willing to travel around the country and the world with me for various competitions,’ he said.