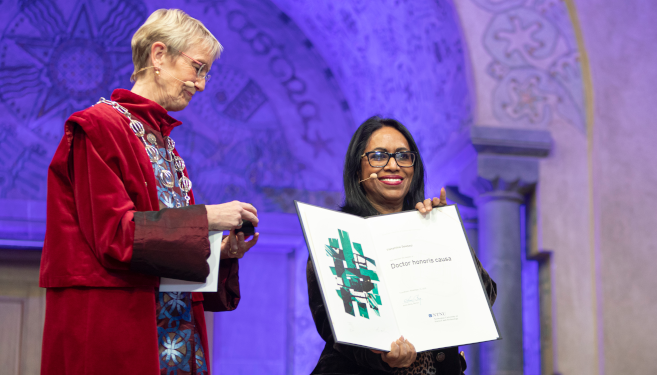 Professor Vishanthie Sewpaul with the Rector of the Norwegian University of Science and Technology, Dr Anne Borg.

UKZN Social Work lecturer Professor Vishanthie Sewpaul has received an honorary doctoral degree from the Norwegian University of Science and Technology (NTNU) - the first time in the history of the university that the award has been presented to an academic in the Discipline of Social Work.

Sewpaul previously received two honorary doctoral degrees – one from a Chilean university and the other from a Swedish Higher Education Institution.

‘While this is a personal honour, it is more an honour for the social work profession - a noble and distinguished profession which to a large extent has shaped who I am,’ said Sewpaul.

NTNU acknowledged Sewpaul’s contributions at national, regional and global levels and her commitment to social work education, research and practice with a focus on social justice, human rights and emancipatory education. They also cited examples of her being at the forefront of developing global documents through widespread processes, such as the Global Standards for Social Work Education and Training (2004); the Global Social Work Definition (2014) and the Global Social Work Statement of Ethical Principles (2018).

Sewpaul’s association with NTNU has inspired a new inter-disciplinary course on Global Ethics and Human Rights, which she will be co-teaching.

She delivered the special Tony Tripodi lecture in International Social Work at Columbia University and gave a lecture at Fordham University, both in New York.