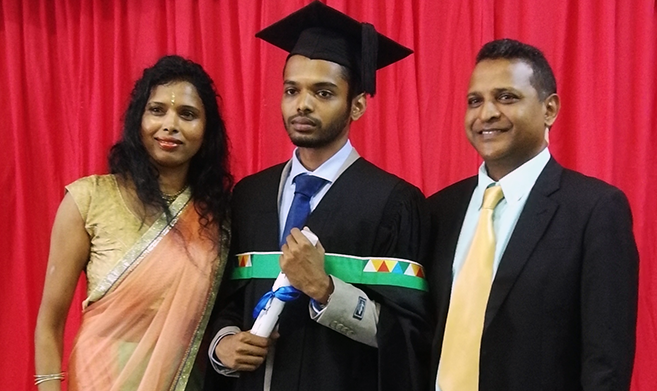 Moodley grew up in the small town of Tongaat and his father spotted academic talent in the young boy at 18 months old when Lushen started solving block puzzles. Lushen began reading at the age of three and at four and a half he was solving long division problems!

Growing up in a family that struggled financially, he could not afford the luxury that many adolescent children were able to such as movies and going to the mall. Instead, his father would take him on walks to the library and it was during this time that he developed his fascination for Space after reading books on the subject.

Moodley was placed in the top 100 in the SA Mathematics Olympiad on three occasions while in high school, hence it was no surprise he chose to do a BSc degree in Applied Mathematics and Physics at UKZN.

‘I soon learned that the academic staff at UKZN’s School of Mathematics, Statistics and Computer Science are exceptional,’ said Moodley. ‘It has definitely been an honour working with them.’

Moodley completed his honours degree and immediately registered for his MSc in the field of Applied Mathematics. His master’s dissertation examined modelling stars and other cosmological fluids by modifying Einstein’s equations with certain impositions. He was led to the study of general relativity, first proposed by Einstein, by his inquiring mind and with the guidance of his supervisor, Professor Sudan Hansraj, was able to produce three publications from his master’s work.

‘Prof Hansraj has inspired me with his passion and insight into the field of relativity and has been my mentor for the past three years,’ said Moodley.  ‘I am very happy that he is supervising me for my PhD research.’

‘It is through research in relativity that we can gain a better understanding of the universe and what lies in it. These discoveries could answer the more controversial questions out there such as whether we are actually alone in the universe,’ explained Moodley.

Moodley described his master’s work as challenging at times. ‘The thing about research is that it is highly unpredictable and making new discoveries in the field is never easy,’ he said.

In his spare time, Moodley enjoys online gaming and plays competitive blackball pool, for which he has obtained provincial colours.

Moodley hopes to continue with research and lecture in the field of Astrophysics. ‘I don’t see myself leaving in the near future,’ he said.

‘I believe that despite our circumstances growing up, we all have the power within us to change the direction of our life and be who we want to be,’ said Moodley.