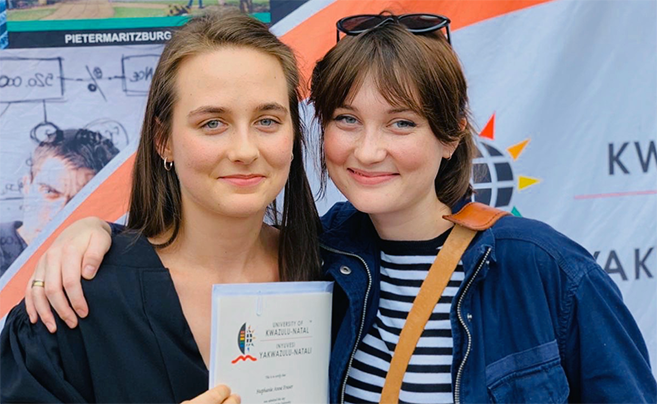 Sisters in Science Doing it Together… and For Each Other

Both sisters matriculated at Northlands Girls’ High School in Durban and enrolled at UKZN.

Gillean sailed through her BSc and BSc Chemistry Honours degrees with outstanding results, before moving on to a Master’s degree in Organic Synthesis, under the supervision of Professor Neil Koorbanally.

Her master's course involved three major sections: the synthesis of nine novel quinoline chalcone compounds, characterisation and complex nuclear magnetic resonance (NMR) analysis of these compounds and finally, antibacterial testing of these compounds. She said she enjoyed the NMR techniques the most, as ‘it’s very much like a puzzle so it really gets the cogs turning.’

The impact of Gillean’s research work is that the compounds she synthesized are novel, and the antibacterial activity impressive. These compounds can be explored in future development of antibacterial drugs.

‘Gillean has always been an exceptionally hardworking student,’ said Koorbanally.  ‘Her interest in medicinal chemistry and passion for discovering new drugs has led to her success during her masters. She has a bright future ahead of her.’

Currently working as a data insights analyst at Touchsides, Gillean attributes her ability to branch out and thrive in the business world to her background in science

Younger sister Stephanie registered for a BSc degree at UKZN as she felt the Institution gave all students an equal opportunity to succeed regardless of their background. She praised her lecturers’ scientific advancement and commitment to tackling global changes, citing this as her inspiration to pursue a similar scientific career path.

Stephanie says her honours degree was a transformative year, where through an intense period of learning and development, she was able to establish a clearer vision of a career in research.  Her project: Preparation of Cellulose-Based Nanocomposite Thin Films and their Application as Alternative luminescent Conducting Materials, is under review for the Royal Society of Chemistry (RSC) journal, Materials Advances.

With the help of a National Research Foundation grant, Stephanie is currently studying towards a Master’s degree in Chemistry, investigating the design of nanocomposite materials for application as sustainable biosensors under the supervision of Professor Werner van Zyl.

The sisters, who both play the violin and piano in their spare time, credit their success to God and family.

Proud parents David and Leigh-Anne said it had been a great pleasure for them, both UKZN alumni, to see their two eldest children following Science, Technology, Engineering and Mathematics (STEM) qualifications which equipped the young women so well for career options in the world.

‘It has been thrilling to have Professor Koorbanally, who was a fellow student with us, now supervise our eldest daughter Gillean’s postgrad research and also be deeply involved in our second daughter Stephanie’s undergrad and honours work. He is a first-rate researcher and inspiring leader,’ said David.

‘We are thankful that the University has provided our girls with a high-quality, world-class education that measures up with the best anywhere.’