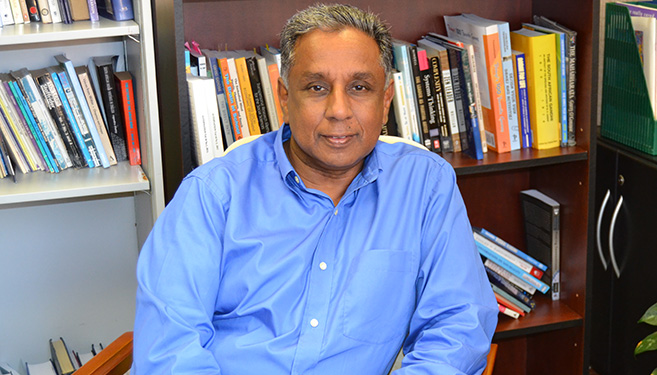 Professor Kriben Pillay, Associate Professor in the Graduate School of Business and Leadership at UKZN.

Leading Self in a Time of Crisis

In the Graduate School of Business and Leadership at UKZN, I specialise in teaching and researching an awareness-based experiential model of personal and collective transformation called Theory U. An internet search will yield much by way of reading and visual materials.

However, this sharing is not meant to be an academic, scholarly exploration, but rather a self-reflection in the spirit of the journey that one takes in Theory U. It’s a simple journey; be mindful of our limiting and distorting stories (called mental models in Theory U) of self and the world – stories that are largely the result of our socio-cultural conditioning, including our education – through a process of being both mindfully aware and engaging in rigorous critical thinking. This facilitates entering into a field of spaciousness, both outwardly and inwardly, through letting go and arriving at Presence. Presence is simply the state of being both present and sensing with all one’s faculties, not just thinking, so that we are open to the unfolding of new possibilities without the hindrance of fear and anxiety

The intent in this self-reflective piece is to show you how mindful self-inquiry can lead to a place of deep peace amidst an unprecedented crisis.

However, this is not about magical thinking; that all one’s practical problems are resolved, or that feelings like grief or deep concern for a loved one’s well-being will not arise. Rather it is about something that most of humanity has avoided through incessant mindless activity, that is, engaging fully with the present – dealing with what needs to be done now (sweep the floors, wash the dishes, attend to emails, etc) – rather than being lost in thoughts of the past or future. If you pay close, mindful, attention to your experience, you will see that worry, anxiety, fear and stress always arise from the thoughts of the past or our projections about the future. In the present, without the habitual patterns of thinking, there is just full engagement with what’s arising now. This is a very different quality; it is that of Presence.

What I’ve described above is a journey that begins when we are willing to suspend our mental models of past and future (this does not mean not planning the practical details for the future – what to cook, when to schedule an appointment, etc).

In my journey with COVID-19, I was initially overwhelmed by anxiety and confusion brought about by all the narratives and counter-narratives surrounding the pandemic. For those of you who have not been exposed to them, here is a short, generalised list:

•    The Coronavirus is a natural mutation arising within bats. From a bat it spread to animals that were sold for human consumption in a wet market in Wuhan, and then to humans (this is still the dominant scientific narrative)

•    The virus was created by a Bill Gates company so that his financial interests in pharmaceutical companies will rise astronomically. In particular, he wants to test a vaccine in Africa first because it is a lucrative market for the sale of vaccines

•    The pandemic is a ploy by the world’s wealthy elites to enslave the masses through fear and eventual control (through severe restriction of movement, and extreme surveillance as in China, the UK, the US, etc)

•    The earth is an interconnected system, and the system is simply pushing back as a natural result of its sub-systems reaching tipping points

I am sure that I am leaving out other theories, but I think you get the point. Of course, some of these perspectives may also support others eg, the virus did originate in a wet market in Wuhan, but its spread is the result of systemic factors, ie. population density, unabated travel, etc. The difficulty in taking in all these perspectives, each with their own show of evidence (some dubious and some quite plausible), is that you can either be overwhelmed by total confusion and fear, or, in taking the journey from suspending mental models to mindful and critical seeing, you are turned inward. And you realise, at least for the time being, that you have to honestly acknowledge the following from what is observed: that you do not know what is absolutely true. Again, this unknowing is emphasised in the Theory U process; letting go of old mental models in order to bring in the new through fearless Presencing.

This unknowing is part of deeper inward seeing, of finding the stillness beyond words, where we don’t necessarily know the facts, but we find ourselves acting more holistically. Not being driven by fear still means heeding the best medical advice about hygiene and social distancing, etc. In the language of Theory U, this is Performing.

In the spirit of dialogue, I also engaged with other travellers on this path. My American friend, author Steven Harrison, who has dedicated his life to self-inquiry and exploring mindful awareness, wrote the following:

The narrative of fear is the primary story being told, with a counter narrative that this is all a hoax or at least overblown. The point of origin narrative is always the other, not the self. I wonder if there could be a deep looking into the anxiety around death, the fear of not enough (breath, food, toilet paper), and the response to isolation not as a restriction, but rather as contact with an arising of change.

Steven talks about engaging with our fear; not analysing it, but mindfully not resisting it. This is again a movement of unknowing, of being in full contact with Life as it is felt in the body (when we feel unpleasant sensations like anxiety or fear, don’t we quickly move to distract ourselves with entertainment, food, addictions, excessive thinking, work, etc?). Non-resistance, it is suggested is a portal to something new in the moment. Later, it may become the old, but because we have activated our adaptive intelligence, we are fully open to the next journey of discovery. In this way we live a deeply creative life; which is not a life of denial, but one that is moving from fact to fact, rather than from story to story. Again, referring to the exploration of Theory U, this Presencing – not feeling separate from the field of Life – begins to initiate the emergence of change. But this change may not be the mind’s idea of change. Like the present crisis, it may be very disruptive.

That’s why Theory U also warns us of:

•    The Voice of Judgement

To allow oneself to take this journey – again and again if need be – one has to be mindful of these three voices. Their job is to keep us stuck in the old known (and thereby in fear), and this is why those who have engaged with Theory U or processes like this, may take to it at an intellectual level, but never really engage fully with the experiential dimensions of the process. Our current crisis, in its positive aspect, offers this opportunity. We can’t argue with Life anymore or run away (although we will instinctively try as a conditioned, reflex action); we have to embrace it. And in that embrace we may discover something profound.

Professor Kriben Pillay is the former Dean of Teaching and Learning in the College of Law and Management Studies and an Associate Professor in the Graduate School of Business and Leadership at UKZN where his conducts research on the brain, illusion and consciousness in leadership. He is a writer across many genres; his poems and short stories appear in many South African anthologies and he recently contributed a chapter on leadership in the book, Large Scale Systemic Change, and a chapter titled The Illusion of Solid and Separate Things: Troublesome Knowledge and the Curriculum to the book Disrupting Higher Education: Undoing Cognitive Damage. His most recent book is The Survivalists: Visionary leadership for South Africa’s marginalised entrepreneurs – The Story of IBEC. He is currently writing a self-study on awakening.