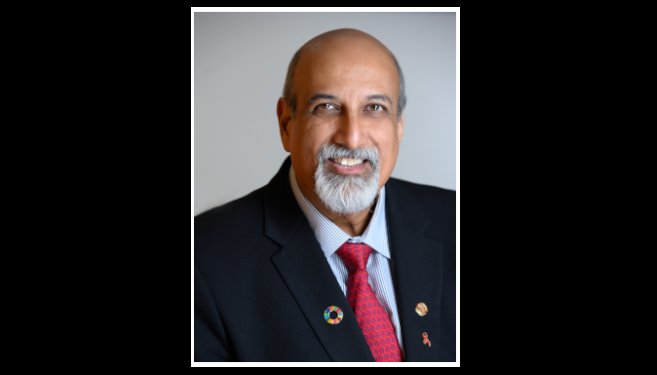 It is improbable South Africa will be able to prevent the exponential spread of COVID-19 with the full impact of the disease likely to hit the country only later this year, says renowned UKZN Epidemiologist, Professor Salim Abdool Karim.

Speaking during a data@breakfast Zoom presentation, Abdool Karim - also Director of CAPRISA and Chair of the 51-person SA Ministerial Advisory Committee on the virus - said although South Africa had acted quicker than most other countries in identifying the virus and implementing measures to halt its spread, the early interventions had only bought the country time to prepare for what scientists are calling an “almost inevitable” dramatic rise in infections.

Abdool Karim, affectionately known as “Slim”, explained that the country had managed to delay an exponential curve. ‘It is a difficult truth, but can we avoid the exponential spread? No… unless we have a mojo that other countries don’t have. As soon as the opportunity arises for this virus to spread, it will go back to the exponential curve.’

While concern existed over whether testing was adequate in poorer communities and that many cases were undetected in those areas, it was far more likely that early and decisive interventions had curbed the spread of the virus.

‘We expected to see an exponential growth in our epidemic but this didn’t happen,’ he said. ‘Testing capacity had increased and as such dispelled these concerns for the most part.’

The co-head of the National Institute for Communicable Diseases’ (NICD) Centre for Respiratory Diseases and Meningitis, Professor Cheryl Cohen, had earlier said the country’s initial cases had been largely imported - referring to travellers who were infected abroad, returned home and then passed the virus on to those they came into contact with.

Abdool Karim explained that these two groups – the travellers on the one side and the people they infected on the other – were expected to pass the virus on to their communities.

‘When it enters a community, it spreads like wildfire. For some reason, those two groups did not lead to this. We still have community transmissions, but it’s at a low level.’

As the local epidemic curve flattened and plateaued to a lower average number of daily new cases, testing capacity for the 80% of the population who do not have medical aid had been ramped up.

According to Abdool Karim, government’s response was informed by eight key strategic responses planned and executed from early on.

The first four stages had unfolded in the past weeks, while the next four stages would be informed by the data received over the coming two weeks.

The next stages were:

•    Stage 5: Identifying hotspots to enable intervention quickly was key, and massive teams of health workers on the ground were essential to achieve this;

•    Stage 6: This involved preparing the availability of medical care for the time when peak infection arrived, which had started some weeks ago. This included finding and building field hospitals where patients could be triaged before flooding hospitals. Abdool Karim said there were major concerns over the readiness and availability of the healthcare system to deal with the number of patients who would require care;

•    Stage 7: This was a situation Abdool Karim said he understood people did not want to speak about - ensuring burial capacities could meet demand and preparing citizens for the psychological and social impact of large numbers of casualties; and

•    Stage 8: Ongoing vigilance and surveillance, including testing campaigns at mines, schools and large companies to ensure a second epidemic wave did not occur after the initial outbreak was contained.

Abdool Karim has achieved worldwide acclaim in a career spanning more than 35 years, straddling science and activism in his professional career.

His presentation was based on what he told the country on national television on Easter Monday when he appeared beside Health Minister, Dr Zweli Mkhize, to present the facts and figures behind the government’s COVID-19 response.

He said he started out studying measles and epidemics before he chaired the government’s expert committee on polio. He then focused on immunisation, with Hepatitis-B and HIV/AIDS as his main areas of research.

‘I’ve spent most of my life studying viruses. So, in a way, this was an obvious challenge to take up,’ he added.