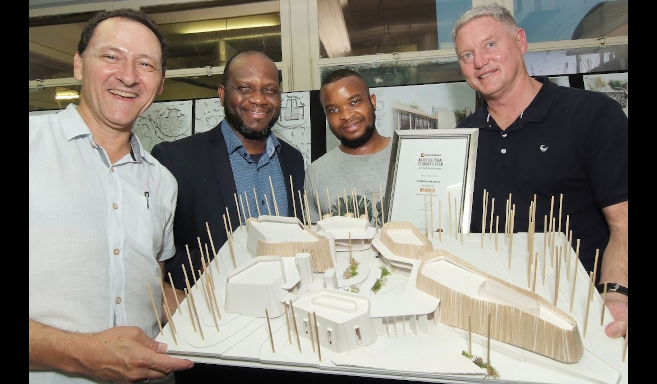 He received R10 000 in prize-money, with master’s student, Mr Kireshen Chetty, taking the second prize of R8 000, and Mr Mthokozisi Sibisi receiving R6 000 for third place. A further R6 000 was awarded to Mr Mbuso Msipho for the innovative use of clay masonry in his building design.

Khuzwayo is one of eight young architects from top South African universities to receive a Corobrik Regional Architecture Award in recognition of their design talent and innovation throughout 2019. In addition to the cash prize, the regional competition winners will compete for the National Architectural Student of the Year Award which carries a R70 000 prize. The winner will be announced in Johannesburg on 6 May 2020.

Khuzwayo’s winning design is entitled, Exploring the Influence of Traditional Healing Practice to Space and Form: A Design Towards a Traditional Healing Centre in KZN. He focused on deciphering the notion of traditional healing to determine how architectural design can become a medium to promote this practice.

‘This will change the negative connotations associated with traditional healing and African indigenous values, cultures and beliefs. The aim was to design a building typology that will provide a platform for traditional healers to network, transfer skills, and engage with the general public,’ he said.

Chetty’s research focused on fashion and social change as a catalyst for architectural design with a proposed fashion innovation centre in Clairwood, Durban. Within the context of globalising urban cities, he investigated and explored means and methods of cultural integration through the commonality of fashion.

‘A collaboration of science, fashion, architecture and art is used to combat the repercussions and wounds inflicted by apartheid and post-apartheid, mainly segregation and xenophobia. The proposed fashion innovation centre is self-sustainable and promotes skills development and regeneration within the community,’ he said.

Sibisi’s project, entitled: Beyond the Landfill: A Design of a Socially Inclusive Recycling Collection Centre in Bisasar Road Informal Settlements, Durban, involves a recycling collection centre with a buy-back facility as its primary functions and educational, social and business elements as supporting secondary functions. It is envisaged that the centre would generate income for people working at the facility.

Msipho’s project was on Identity and Memory as a generator of Architecture.