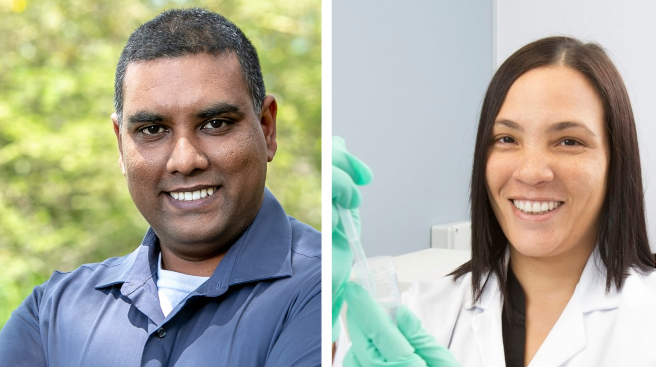 High impact researchers at KRISP at UKZN’s College of Health Sciences, Dr Veron Ramsuran and honorary senior lecturer, Dr Lenine Liebenberg, have been selected as Fellows of the African Academy of Sciences (AAS).

KRISP (KwaZulu-Natal Research Innovation and Sequencing Platform) – which is based at the Nelson R Mandela School of Medicine - is focused on using NextGen sequencing and bioinformatics to answer scientific questions that are of local, national and international importance.

The 40 early career scientists drawn from 19 countries across the five African regions will receive training and mentorship over a five-year period. Two of the four scientists from South Africa who were selected into this prestigious programme are from UKZN; with the third, Dr Philiswa Nomngongo, being an alumnus of the University.

Ramsuran was ecstatic to receive the news. ‘It was a highly competitive process with more than 300 applicants from around Africa. Only four from South Africa were selected, three of us are/were associated with UKZN. It is extremely commendable to observe how well UKZN did in this highly competitive and prestigious programme,’ he said.

Ramsuran graduated with a PhD from UKZN where he examined host factors associating with the HIV disease. He spent the majority of his PhD in two international laboratories, including the Fred Hutchinson Cancer Research Center and the University of Texas Health Science Center at San Antonio. After completion of his PhD, he was recruited to join the Ragon Institute of MGH, MIT and Harvard as a postdoctoral research fellow. After completing five years in these institutes, Ramsuran returned to South Africa and to KRISP. He is now a Group Leader at the organisation, Associate Scientist at the Centre for the AIDS Programme of Research in South Africa (CAPRISA) and a UK Royal Society Future Leader African Independent Research (FLAIR) Fellow. He also has a number of affiliate positions at some of the most prestigious institutes such as the Ragon Institute of MGH, MIT and Harvard as well as the National Institute of Health (NIH), USA.

Ramsuran’s work examined the effect Host Genetics play on HIV and TB. He has a special interest in examining the Human Leukocyte Antigen (HLA) genes, the epicentre of disease associations across the human genome, as determined by genome wide association studies. His recent work examines the effect of differential HLA expression levels on HIV and TB disease, which was published in Science. He is also interested in factors contributing to the differential HLA expression.

Liebenberg is a scientist at the CAPRISA Mucosal Immunology Laboratory. She is also a Future Leaders – African Independent Researcher (FLAIR) Fellow, a SANTHE Path to Independence Awardee, and primary supervisor to three PhD candidates at UKZN’s College of Health Sciences.

Liebenberg’s combined training in medical virology, microbiology, genetics, and immunology direct the scope of her research in understanding immune responses at the human genital mucosa. She has documented methods to improve genital cell isolation from men and women, methods to facilitate genital cellular immune responses in multicentre studies, and has characterised genital and systemic immune factors that facilitate HIV infection, viral shedding and HIV transmission. Her research has highlighted the role of poor female genital health in enhancing HIV acquisition and focuses on understanding the causes of genital inflammation and the mechanism of its association with HIV acquisition to inform on the design of effective interventions that prevent HIV infection in women. She said, the Affiliateship is an acknowledgment of her research and career efforts, and an investment in her potential to improve public health through research. A mother of two young children, she hopes that this achievement will inspire more women to pursue their passions and continue their careers in science.

Dr Judy Omumbo, AAS - Affiliates and Postdoctoral Programme Manager, said: ‘It is exciting to witness the growing recognition of science in Africa’s development agenda. The continent’s best early career researchers are well placed to develop the research and innovations that will ensure future sustainable lives and economies for Africa’s citizens. The AAS Affiliates Programme is developing a truly pan-African and vibrant community of practice in science for Africa’s policy agenda and we are delighted to see the fifth cohort of AAS Affiliates join over 80 colleagues in this effort.’