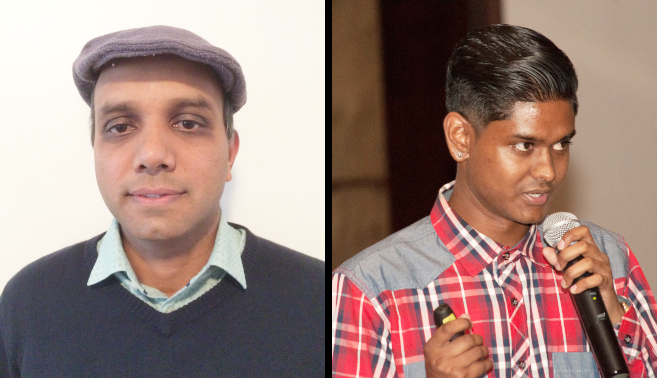 A new method to measure the effect of gravity on the propagation of light in the Universe proposed in a collaborative project led by cosmologists from UKZN and the University of Geneva (UNIGE), has resulted in an academic article being published in the prestigious academic journal, Physical Review Letters. The research collaboration was supported by a bilateral grant for a Joint Swiss-South Africa Research Project funded by the Swiss National Science Foundation and the South African National Research Foundation. This innovative method combines radio intensity surveys and observations of distant galaxies. It represents one more step to test Einstein’s predictions on cosmic scales.

Professor Kavilan Moodley and master’s student, Mr Warren Naidoo from UKZN’s Astrophysics Research Centre, are the South African cosmologists who worked on this exciting research and co-authored the academic article.

The Swiss-South African research team conducted a survey to investigate an interesting application of UKZN’s HIRAX telescope to contribute to measuring the lensing signal and provide constraints on dark energy and modified gravity in an alternative way. This project further strengthened the Swiss-SA collaborative partnership. The work demonstrates a new method to measure the gravitational lensing effect in the Universe, which is vastly superior to the conventional method obtained from galaxy counts.

‘Gravitational lensing occurs when light rays from distant objects are deflected by a large mass distribution along the line of sight, creating a magnifying effect. We can therefore use it as a powerful tool to observe distant and faint galaxies in our universe. This lensing effect also traces the large-scale structure of the universe and therefore, high precision measurements of this signal can greatly improve our knowledge of dark energy and modified gravity,’ explained Moodley.

‘This study also shows the capability of the HIRAX experiment to provide high level measurements which can be used in combination with other planned large scale structure surveys to provide various interesting cosmological applications. Showing that this new estimator performs much better than existing conventional studies is one of the highlights of this research. It was particularly exciting to demonstrate how the HIRAX experiment can contribute to the work being done by various teams around the world, providing new information about our universe,’ added Naidoo.

Speaking about the prospects for this work, he said: ‘We are now working to predict how well this methodology will allow us to test General Relativity and alternative theories of gravity. We now have to prepare to be able to apply this method to future surveys in which our group is involved: UKZN’s HIRAX radio telescope and the European satellite Euclid,’ said Martin Kunz, professor in the Department of Theoretical Physics at UNIGE.