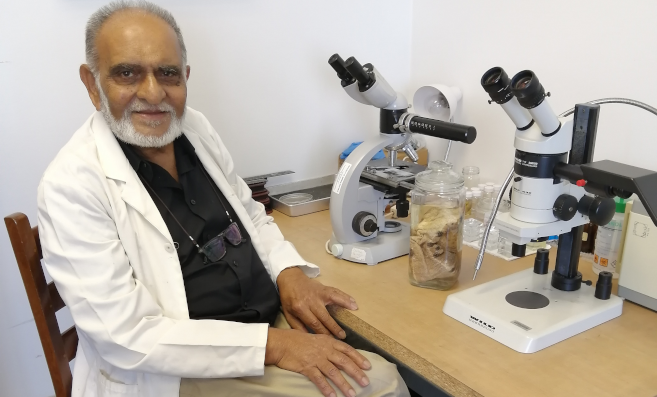 Emeritus Professor in the School of Life Sciences, Ahmed Thandar, has received a B2 rating from the National Research Foundation (NRF) - in recognition of his high quality, specialised and widely-cited research.

He said he was elated to be elevated from C2 to B2 level.

Thandar has carved a niche for himself in his work on the taxonomy, biodiversity and biogeography of sea cucumbers. He is the only South African holothuroid (sea cucumber) taxonomist and is one of a handful of experts in his field in the world. Thandar has also explored holothuroid reproductive biology and the reproductive morphology of a marine slug. On his own or in collaboration with colleagues, he has described 78 new taxa to date, including 60 new species, and has four taxa named after him.

Thandar was Professor and Head of the Department of Zoology at the former University of Durban-Westville (now UKZN) for 12 years. He retired in 2002 but continued his research and supervision of students in his role as Emeritus Professor. He joined the then University of Durban-Westville academic staff in 1967, serving on numerous committees including commissions of enquiry, the University Senate and Senex and Council an Exco member. He served on several NRF committees, the Council of the Zoological Society of South Africa, on interview panels for Fulbright Scholarship applicants, and as a reviewer for various journals.

Thandar’s extensive publishing has led to a number of invitations for international research and collaborations. At the invitation of the University of Alberta, he conducted research on apodous sea cucumbers of the North-East Pacific at the Bamfield Marine Station on Vancouver Island in 1993. He also took part in the Flemish-South African Bilateral Cooperation Grant with scientists from two Belgian universities, the University of Cape Town and the University of Durban-Westville.

A former Fulbright Scholar, Thandar attributes much of his success to having had the opportunity to study in the United States. He also conducted research at the Smithsonian Institution on a short-term Visitor Award in 1999. In 2003, he joined an initiative of the United States’ National Science Foundation, which involved 11 holothuroid experts from around the world gathering in Brussels to enhance expertise in taxonomy, resulting in a website on aspidochirotid sea cucumbers, a group of holothuroids exploited for gastronomic, medicinal and other purposes.

In 2014, Thandar was invited by the Universities of Mostaganem and Algeria to conduct seminars on morphological characters used in sea cucumber taxonomy and on integrative taxonomy for students from Turkey, the Middle East and North Africa. He was the recipient of a Golden Lifetime Achievement Award at the 15th International Echinoderm Conference in 2015, and recently received an honourable mention in India’s top weekly newspaper for his description of India’s newest and smallest sea cucumber species.

He has supervised and examined several postgraduate students from various backgrounds and nationalities, and has presented his research at numerous national and international conferences, with over 80 various publications to his name including a textbook on Practical Animal Anatomy. He is currently completing a landmark monographic study of Southern African sea cucumbers accepted for publication by the South African National Biodiversity Institute, and is conducting research on materials received from the Smithsonian Institution in Washington.