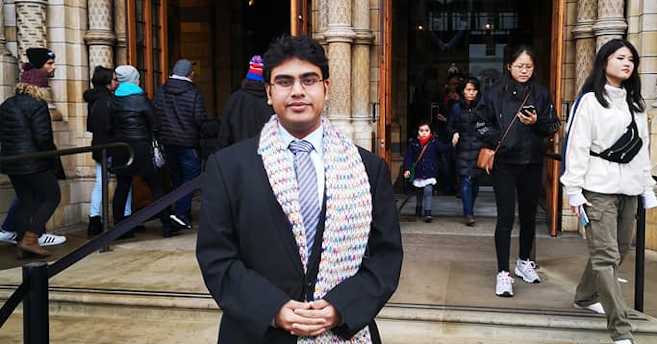 Mr Kapil Narain during his tour of universities in the UK.

The Rising Star award is bestowed on a Medical student who has distinguished him or herself academically, through research, or made an important contribution to society. This individual must be exemplary, and a role model to their peers, with evident talent and potential in academia, research, service or leadership.

‘The awards celebrate excellence in healthcare by identifying leaders in a range of categories who have contributed to research, teaching and advancement of medicine in South Africa,’ said Clinix Health Group CEO, Dr Khamane Matseke.

The process involved nominations from the medical fraternity, business and the public at large. Shortlisted nominees were screened through a rigorous adjudication process by a panel consisting of seven renowned academics from across the country including a chancellor, two medical schools deans, two tertiary hospitals deans, a president of a national specialists’ society, and a surgery head of department.

South African Clinicians’ Society President, Professor Salome Maswime, said: ‘We launched the South African Health Excellence Awards in 2018 because we felt there is a need to acknowledge the talent and accomplishments of doctors and other clinicians in South Africa. We find that many people are doing such amazing work in improving healthcare and also doing ground-breaking research, however, there aren’t enough platforms to celebrate the excellence that we see.’

During his time as an undergraduate Medical student, Narain has published papers in international peer-reviewed journals on HIV, TB and surgery. He is currently the principal investigator in a study on depression among medical students and has led several delegations to international and national conferences on global health.

Cognisant of the looming public health threat of antimicrobial resistance, Narain is the founder and team leader of “Pill-Alert” – an App to improve patient adherence to medication which would reduce the burden of this epidemic. His idea was selected as one of the top 10 solutions globally in an innovation challenge. He and teammate, Mr Mohamed Hoosen Suleman, presented the app to an expert committee of World Health Organization members in Geneva, at the end of 2019.

‘I am humbled and honoured to have received this prestigious award. This is testimony to my dedication and passion for academia, medicine and patients. If anything, I am even more inspired to intensify my academic, leadership and community endeavours in order to assist humanity,’ said Narain.