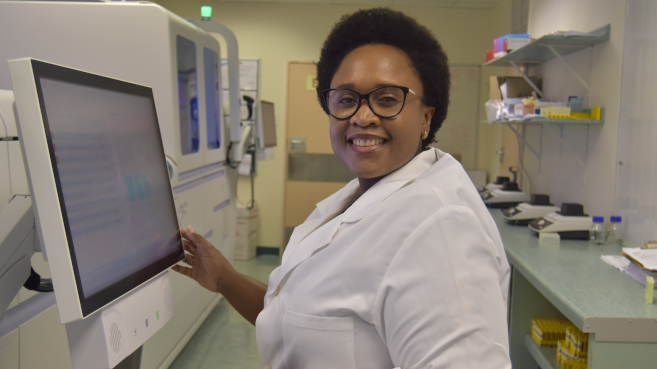 Newly-appointed Head of Virology in the School of Laboratory Medicine and Medical Sciences at UKZN, Dr Nokukhanya Msomi says she looks forward to pursuing her vision in this new position.

‘I’m fortunate to work in a discipline with a strong foundation laid by previous heads. The dedicated team of virologists I work with also makes my job a little easier as we share a common goal,’ said Msomi whose unit is based at Inkosi Albert Luthuli Central Hospital.

She aims to take the Virology Discipline to new heights when it comes to research excellence and increase its visibility as the Discipline operates behind the scenes and its function is not well understood by the public. She believes that this will be achieved by forging strong collaborations nationally and internationally.

Msomi has a wealth of experience and training in HIV management and her research has been published in peer-reviewed scientific journals. Her research on Viral Hepatitis aims to improve diagnostic science by conducting locally responsive and relevant studies on this devastating disease.

Msomi completed her MBChB at the then University of Natal in 1998 and joined the registrar programme at UKZN in 2009 after running a practice as a clinician. She has a Diploma in HIV Management, Fellowship in Pathology and MMed in Virology.

She is currently completing her PhD on the evolution of the Hepatitis B virus and its variants. She is a current NRF grant recipient and previously received the Wellcome Trust scholarship to study viral genomics and bioinformatics at the Sanger Institute in Cambridge, UK. She also serves as a member of the World Health Organization (WHO) sanctioned National Certification Committee appointed by the Minister of Health to guide and drive South Africa’s efforts to eradicate polio.

A self-driven, dynamic person with good interpersonal skills, she seamlessly functions as a lecturer, researcher and a service pathologist. She is passionate about mentorship and is an amateur mountain biker.

She said it is encouraging that many institutions are appointing women to leadership positions. ‘Women lead homes and communities, which makes them natural born leaders.’