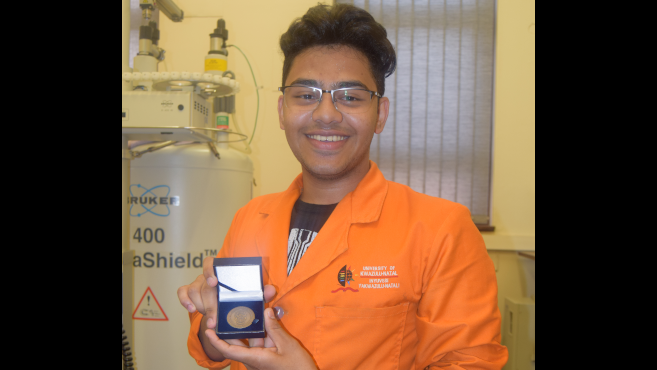 Mr Shabaaz Abdullah, who is currently enrolled for a Master’s degree in Chemistry, has received the prestigious James Moir Medal from the South African Chemical Institute (SACI).

The medal is awarded to the top Chemistry student in their honours year at each university and university of technology across South Africa. To be eligible for the award, a student must achieve a minimum average final pass mark of 75%.

Abdullah also received the Bruker SA Chemistry Honours Award at the 2019 College of Agriculture, Engineering and Science (CAES) prize-giving ceremony. Both awards were in recognition of his being placed at the top of the honours class in the School of Chemistry and Physics across all UKZN campuses in 2018. He was invited to address the 2020 CAES first-year students during their Orientation to inspire greatness within them.

Abdullah attended Nizamia Islamic School in Pietermaritzburg, where his love for science was born. This led him to pursue a degree in Chemistry. ‘Chemistry is not only useful in research, it is fun and gets people talking,’ he said. During his undergraduate studies. he learnt that he could create new things using chemistry such as pharmaceutical drugs, which led him to pursue postgraduate studies.

Abdullah also credits his love for science and chemistry to his father. ‘My dad has played the greatest role in my life,’ he said. ‘He has taught me that we can do, create, and achieve a lot with our hands.’

When he is not busy with his research, Abdullah enjoys swimming, going to the gym and spending time with friends. He lives by the maxim: ‘The only person you should compete with is yourself.’