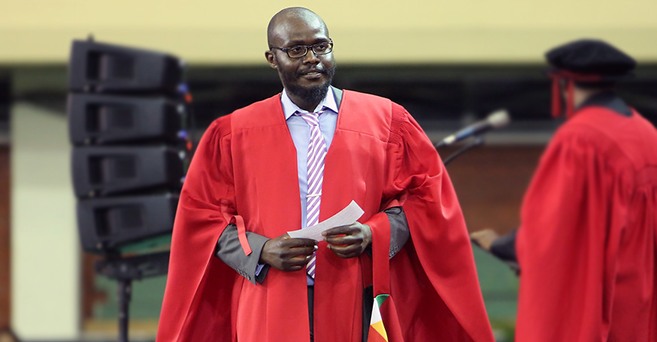 Dr Michael Mwalaba graduated with a PhD in Physics.

PhD Harnesses the Dynamics of Information in Quantum Technology

A study of the Markovian and Non-Markovian dynamics in a simple mesoscopic system earned Zambian national Dr Michael Mwalaba a PhD in Physics.

‘I did my MSc degree at UKZN and really enjoyed the depth of the research undertaken with my supervisors, Professor Francesco Petruccione and Dr Ilya Sinayskiy,’ said Mwalaba.  ‘At first, I wanted to move on to another university overseas, but in the course of the programme, I realised that my supervisors were talented, world-renowned experts in the field and that I would learn a great deal working with them further in my PhD.’

‘Michael studied the dissipative dynamics of the fermionic systems in star configurations,’ explained Petruccione. ‘Examples of such systems are ultracold spinless fermionic atoms in optical lattices or quantum dots. He derived and solved analytically corresponding Quantum Master equations using Kraus representation and an algebraic approach. These solutions allowed for the study of the transitions between Markovian and non-Markovian regimes of the dissipative dynamics as well as thermodynamical properties of the system.’

From childhood Mwalaba nursed a burning curiosity to understand how technologies worked. ‘For example, from before I was nine years old,’ he said, ‘I really wanted to know exactly how information is transferred from a person speaking into the microphone at a radio station to my father’s radio in our house.

Mwalaba is currently based in the solar energy laboratory at the University of Zambia.  He credits the PhD research work undertaken at UKZN’s Quantum Research Group for helping him understand the “microscopic details” of how sunlight is captured by solar cells and converted into solar energy. ‘This puts me in a better position to think about improvements that can be made to current solar cells,’ he said.

Mwalaba paid tribute to his parents and teachers who taught him the importance of education, and ‘the Lord Almighty Jesus Christ who opened up opportunities and ensured that I completed my education.’

In his spare time, Mwalaba enjoys engaging in church activities, spending time with his family? and game viewing.