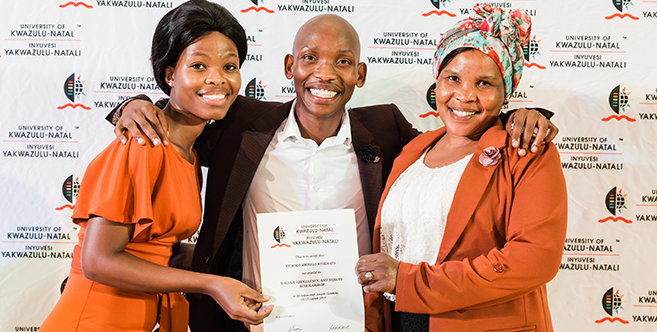 The prestigious award, funded by UKZN, enables the University to grow the next generation of academics.

His Masters research is focused on differential geometry, involving the study of the geometry of curves, surfaces and manifolds. ‘I study the geometry of manifolds called the Kähler manifolds, a special type of complex manifold,’ said Khuzwayo. ‘I intend to determine the relationship between locally conformal Kähler structures and Kähler structures, as these structures have important applications in classical mechanics.’

Khuzwayo chose this field because of its abstract nature and its applicability to other fields including general relativity. ‘By doing research in this field, I am positive that my work will be used someday to solve real life problems,’ he said.

Khuzwayo grew up in the village of KwaKhoza in Eshowe where he attended Imfihlo Primary School and Phindulimi High School, being raised by his grandmother while his parents were away working. He chose to study at UKZN because of its good reputation in research and teaching.

He said receiving the Talent Equity and Excellence Acceleration Scholarship was a great honour and would make it possible for him to help increase the number of mathematicians in South Africa.

‘I enjoy making a lifelong impact on other people’s lives. I hope to be one of the world’s best mathematicians.’

Khuzwayo aims to be a source of inspiration to students attending disadvantaged high schools, and plans to encourage them to work hard, believe in themselves and to consider mathematics as a career choice.

Khuzwayo thanked his supervisor, Professor Fortuné Massamba, for his guidance and for being available whenever Khuzwayo needed him. He also thanked his parents for their support and his primary school and high school teachers for being a source of inspiration.

He acknowledged the support of postgraduate colleagues he shares an office with, especially Mr Tebogo Kgothi and Mr Mohamed Hamed.

While his studies do not leave him with much free time, when he does have a gap, Khuzwayo uses this time to attend church or play chess.