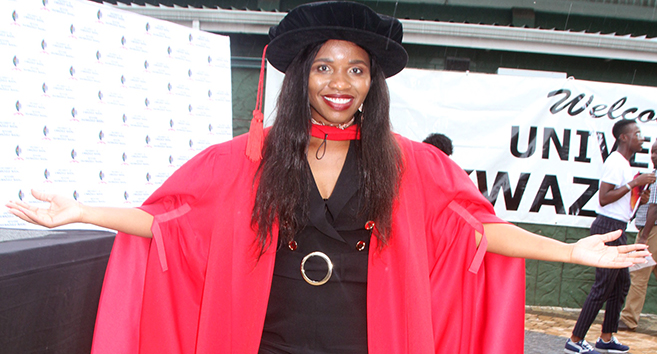 Dr Grany Senyolo is the first Black South African to graduate with a PhD in Agricultural Economics from UKZN.

Dr Grany Mmatsatsi Senyolo was overjoyed to graduate with a PhD in Agricultural Economics from UKZN – the first Black South African to do so.

The Tshwane University of Technology lecturer was formerly employed as an Agricultural Economics lecturer at UKZN where she got the opportunity to register for her PhD.  ‘It was my dream to work with some of the best Agricultural Economist researchers in the country,’ she explained.

‘There has been a decline in the production, use and diversity of African Leafy Vegetables (ALVs) in South Africa,’ said Senyolo. ‘My study employed various econometric approaches to analyse the value chain and determine the factors influencing production and consumption of ALVs in Limpopo.’

Her study revealed that socioeconomic and perception factors determined consumption and production.

Senyolo has had three papers published in accredited journals and all the empirical chapters of her thesis were presented at international and local conferences.

Said Senyolo:  ‘Africans have forgotten who they are and what they eat owing to Western influences. Consumption of African leafy vegetables such as collard greens, mustard greens, amaranth and spider plants has declined, however it is important to go back to who we really are, consuming our indigenous food as this is highly nutritious and affordable compared to exotic food introduced by Europeans into Africa.

‘There is a need to build agro-processing plants for value addition to meet people’s preference, especially the youth and urban dwellers.’

Senyolo explained the motivation behind her research: ‘I was awarded a Fulbright Scholarship to study at Texas A&M University in the United States in 2009. When I went to a grocery store there, I was surprised to find fresh African leafy vegetables in the fridge. These were the very same vegetables that our people consumed many years ago and now look down upon as “poor man’s” food.

‘I realised that if Americans can have them in formal grocery stores and restaurants, why not us? I decided to come back and look at the opportunities to commercialise African leafy vegetables for access by the educated, young, rich and urban dwellers.’

Senyolo’s research is significant in bringing back awareness and appreciation of the value of ALVs, and encourages their production and consumption through value adding and commercialisation in formal markets in both rural and urban areas.

Senyolo hopes to help ensure that there are agro-processing companies that deal with value addition to all ALVs, including wild fruits.

Senyolo thanked her supervisors for being there for her as well as her mother for being a pillar of strength.  ‘When life situations kicked me hard and I considered giving up on my studies, mom would call and say:  “No-one will take your PhD away, Grany, please finish!”'

‘Being the first Black South African to be awarded a PhD in Agricultural Economics at this University is an honour and a blessing. To God be the glory.’