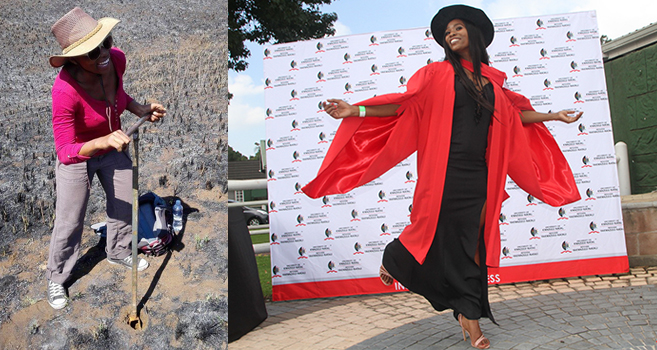 The Answer Lies in the Soil for PhD Graduate

Dr Nkosinomusa Dube, a lecturer in the Discipline of Soil Science at UKZN, has graduated with a PhD after investigating soil indigenous knowledge related to agricultural and non-agricultural uses in four villages in KwaZulu-Natal (KZN) and the Eastern Cape.

Dube, who grew up in a farming family in northern KZN, was interested in exploring the knowledge smallholder, rural farmers have about the soil their livelihoods depend on, and how they apply that knowledge. She also wanted to uncover how, without much formal schooling, they classify soils and use their indigenous, or ethnopedological, knowledge to sustain productive farming systems.

The unique research she undertook contributes to filling a gap in the understanding of indigenous knowledge of soil, an area that has not received much attention, particularly in South Africa.

Dube worked with four communities – two in KZN and two in the Eastern Cape – to capacitate community members deliberately by making them active participants in her research, to which they contributed local knowledge.

‘Once we understand this knowledge, we are able to develop solutions that are contextualised to meet farmers’ needs, and understand the properties that are of interest to them,’ said Dube.

She investigated communities’ understanding of soil taxonomy, mapping and fertility, and selection and the use of healing, cosmetic and geophagic soils, comparing local assessments of soil fertility and mapping to scientific approaches.

She discovered that farmers have detailed knowledge of soils familiar to them. They had formulated a practical local classification system as well as well-developed soil fertility indicators that they used to allocate crops to certain areas. Although revealing local soil fertility problems, at times farmers’ subjective assessments based on observable physical aspects did not correlate with laboratory results. This indicated a need to balance their descriptive fertility indicators with a chemical laboratory fertility assessment to ensure accurate fertiliser recommendations for the benefit of local soil and cropping systems.

While investigating non-agricultural uses of the soil, Dube found that ukhethe soil used for consumption contained beneficial compounds like zinc, copper and cobalt. She found that ibomvu soil, used for healing and cosmetics, contained kaolinite and iron oxides as well as titanium dioxide and a high critical wavelength, explaining its effectiveness as a sunscreen.

Dube noted that farmers had observed changes in crop yield due to changes in rainfall patterns and declining soil fertility, demonstrating their awareness of a system under pressure owing to climate change and other factors. She also drew attention to the use of agricultural soils for construction, revealing a land-use conflict that could be addressed by improved land and soil suitability classification systems that consider, value and protect agricultural and non-agricultural uses of soil.

Her research was published in the Geoderma journal, and she hopes it will contribute to ethnopedological studies, saying that if farmers’ knowledge is valued for its own sake, it will conscientise policy makers and increase farmers’ access to resources they need.

Dube thanked her supervisors Professor Jeff Hughes, Professor Albert Modi, Professor Pardon Muchaonyerwa and Dr Karen Caister, for going out of their way to support and encourage her and for their diverse expertise that strengthened her thesis. She also credited the University for offering teaching support while she was completing her PhD.

The determined mother-of-three also thanked her husband, Mr Sabelo Dube, for his vital support and her friends for their encouragement. She dedicated her achievement to her mother, who she said shared in the triumph of this graduation.

Dube, who completed all her studies at UKZN, fell in love with the subject of her research when she encountered it through classes with Hughes as an undergraduate, and described how diverse a discipline it was.