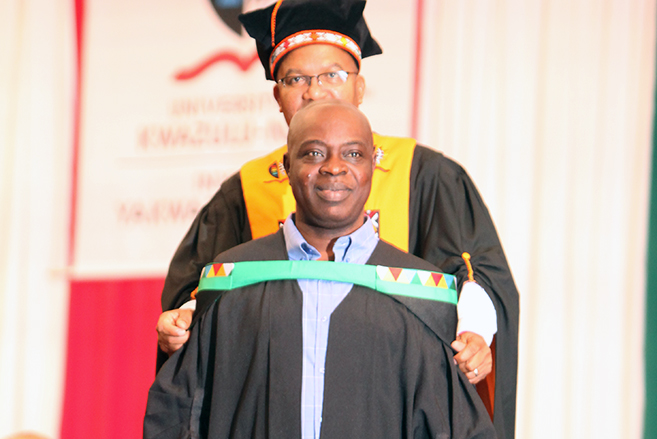 Mr George Ilangila was awarded a Master of Science in Human Nutrition.

From an army officer in the Democratic Republic of Congo, to the streets of South Africa where he was a security guard and a street vendor, to the proud recipient of a UKZN Postgraduate degree - Mr George Richard Ilangila has climbed the academic ladder the hard way.

Ilangila was awarded a Master’s degree in Human Nutrition after researching the impact of the 2018 sugar-sweetened beverage tax on the purchases of Black African women shopping at the Edendale Mall in Pietermaritzburg. His study was funded by the National Research Foundation (NRF) in 2018 and the Halley Scott Foundation in 2017.

Ilangila explained that malnutrition could manifest itself in a person being overweight and/or obese as well as being underweight, and posed a threat to public health. He explored how a tax might affect the consumption of sugar-sweetened beverages, which if consumed excessively could lead to increases in obesity, which heighten risk factors for hypertension and non-communicable diseases including diabetes, strokes and cardiovascular disease.

He hoped that reduced consumption of sugary beverages would reduce the prevalence of obesity and its related diseases.

Ilangila arrived in South Africa some 20 years ago following unrest in his own country that led to him fleeing to South Africa. The former senior army officer found work as a security guard in Durban and sold sweets and chips to make ends meet.

Having completed degrees in the DRC in Electronic Engineering at the Institut Supérieur des Techniques Appliquées in 1985 and in 1988 in Social and Military Sciences at the École de formation des officiers, and having seen the malnutrition suffered by people languishing in refugee camps on his journey south, Ilangila was determined to continue his studies in Human Nutrition.

Ilangila adapted to a new language of instruction and new study methods and techniques with the help of staff in the Discipline of Dietetics and Human Nutrition and in the Student Counselling and Disability units. He persevered through the challenge of being far from home to complete his studies, encouraging himself never to give up on his dreams and ambitions.

He thanked God first for the gift of life and sustenance, and his supervisor Dr Nicky Wiles for her endless support, responsiveness, wise advice, guidance and patience, which he said contributed immensely to the completion of this study. He thanked his co-supervisor Dr Annette van Onselen for her guidance, support and encouragement to press ahead with this work despite challenges early on.

He also gave special thanks to all the academic and technical support staff of Dietetics and Human Nutrition, particularly Dr Chara Biggs and Mrs Elsie Correia for their assistance.

Ilangila hopes to register soon for a PhD.