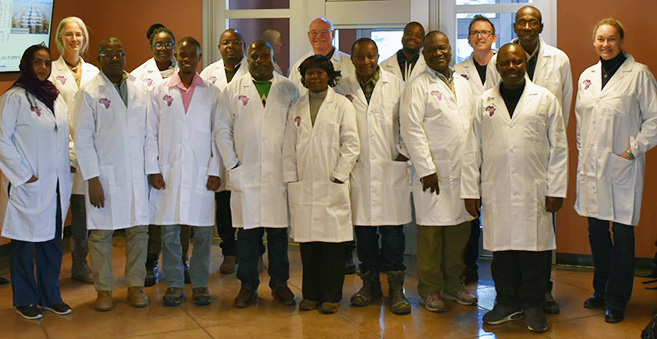 Mr Admire Shayanowako (back row, fourth from right) with other participants at Montana State University.

PhD candidate in Plant Breeding, Mr Admire Shayanowako, recently travelled to Montana State University (MSU) in the United States, where he attended training on the biocontrol of weeds through the Toothpick Project.

Shayanowako was one of 12 scientists from Africa in attendance, with a full scholarship. Attendees represented Benin, Cameroon, Côte d’Ivoire, Ghana, Kenya, Mali, Nigeria, South Africa, Sudan, Tanzania, Uganda and Zambia. Shayanowako was the only delegate attending the two and a half week training in a pre-PhD career stage, facing stiff competition amongst 56 applications; attendees were selected based on the relevance of their research and recommendation from a supervisor.

The Toothpick Project involves biocontrol of Striga strains including S. hermonthica and S. asiatica, commonly known as witchweed. These parasitic weeds affect maize, rice, millet, sorghum and sugarcane in 17 countries in sub-Saharan Africa, and result in enormous yield losses. These hemiparasitic plants can produce as many as 500 000 seeds that remain viable in the soil for 10 years, thriving in poor soil and under drought conditions.

Using the Fusarium oxysporum f. sp. Strigae fungus, researchers have been able to get the fungus to attack just the Striga, leaving the host intact. The soil-borne fungus will attack the growing Striga and its seeds, making it a permanent solution.

The project draws its name from the method used to propagate and apply the biocontrol. The fungus is dried onto toothpicks which are added to, for example a pot of boiled rice, forming a substrate for the fungus to colonise in a closed, sterile environment for around two days. The grains are then added to a planting station, where the fungus colonises the Striga. The toothpicks inoculated with the fungus are contained in sealed, sterile drinking straws and given to the farmers to propagate themselves, making it an empowering system where farmers rely on their own sustainable biocontrol production.

Participants plan to pass on the knowledge gained within their regions through forming a pan-African forum for biocontrol of Striga, involving meetings, workshops, grant proposal writing and biocontrol initiatives to address Striga, with the potential to replicate the model for other biocontrol agents for other pests, parasites and diseases such as the Fall Armyworm.

Participants received guidance on combining efforts to look for funding for implementation, and advice on how to improve local biocontrol agents, enhance their virulence and look for local strengths to assist with commercialisation and release to farmers.

Trainers encouraged participants to think commercially, since the biochemistry involved in the biocontrol is sophisticated, and as high-tech and as effective as a commercial herbicide, but more environmentally friendly and potentially more effective.