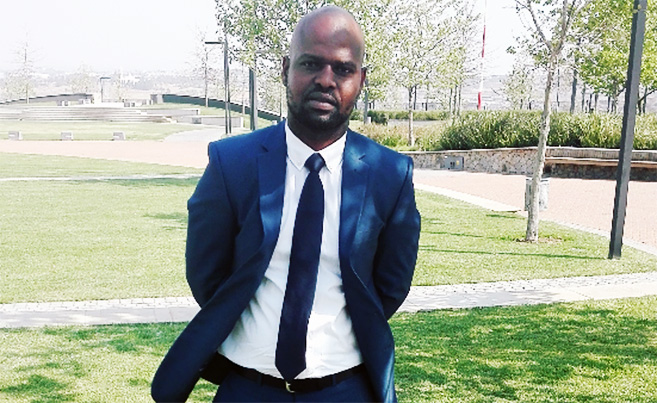 Mr Simphiwe Mathenjwa who graduated with a Master’s in Applied Science.

Mr Simphiwe Mathenjwa graduated with his Master’s in Applied Mathematics from the School of Mathematics, Statistics and Computer Science (SMSCS) for his research on local isometric embeddings that have importance to Astrophysics as they could generate new solutions to the Einstein field equations, giving mathematical insights into physical models of higher-dimensions.

‘The study of higher-dimensional theories can help explain fundamental questions that are of physical and cosmological significance, such as why there are only six types of quarks and leptons, why neutrinos are massless and whether we live in a Universe with finite spatial dimensions,’ he explained.

In his research, Mathenjwa obtained new exact solutions to the field equations, which are of physical importance since they describe spacetimes that can be used to model various astrophysical and cosmological phenomena and describe qualitative features that can emerge in Einstein’s General Theory of Relativity.

‘The secrets of the Universe may be buried in the Einstein field equations and its solutions may provide a window to some of these secrets as well as having applications in modern technology,’ he said.

Mathenjwa is a keen chess player, reader and traveller. His love for Mathematics began in his youth when he realised that this was the best way to explain natural phenomena. Pursuit of this field was, he said, part of working to satisfy his curiosity about the workings of the Universe even if he could only draw one physical insight from mathematical models that could further influence various branches of science.

He was drawn to studying at UKZN because of its quality education and proximity to home as well as its academic reputation in mathematics, statistics and computer science.

He thanked his supervisor, Dr Gareth Amery, for the role he played in getting him to complete his Master’s; administrative staff in the SMSCS, particularly Mrs Shereen Marimuthu, for their support; Professor Loyisa Nongxa; the SMSCS, particularly Dr Sudan Hansraj; UKZN for providing assistance and material support as well as his family and friends who helped him succeed.

Mathenjwa now works as a data scientist at IT service management company EOH, and plans to complete his PhD. He is passionate about shaping future leaders and contributing to research in his field that will influence future theories.