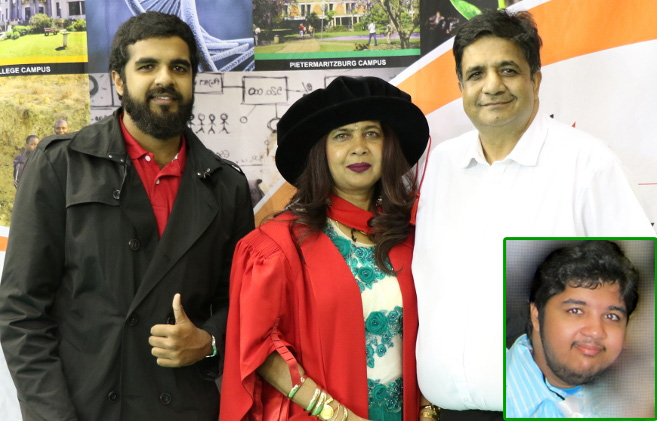 UKZN academic, Dr Patricia Govender, graduates with her PhD in Chemistry, with the support of her family. Insert: Her late son, Mr Teshan Govender.

Although faced with personal challenges throughout her postgraduate studies, Dr Patricia Govender still managed to graduate with her PhD from the School of Chemistry and Physics.

While pursuing her Baccalaureus Procurationis (BProc) degree with the intent of becoming a Patent Attorney, her son, Teshan Govender, was diagnosed with Duchene Muscular Dystrophy; a terminal genetic disorder. Despite her challenging circumstances, she pursued her Honours and a Master’s degrees in Analytical Chemistry whilst taking care of Teshan. In March 2012, she registered for her PhD in Medicinal Chemistry. Two months into her PhD studies, Teshan passed away on Mother’s Day (13 May 2012).

A devastated Govender deregistered from her studies. However, after much heartache and struggle with the loss of her son, she courageously re-registered for her PhD in 2015; compelled to conduct research that would contribute to the development of drugs to treat bacterial infection, cancer, malaria and ultimately save lives.

Govender’s PhD study involved the synthesis and biological activity of quinoline derivatives. Hybrid molecules were engineered by combining two bioactive pharmacophores through reactive sites on the quinoline scaffold. Their structures were determined using Nuclear Magnetic Resonance Spectroscopy. The compounds showed interesting antibacterial activity and could be the basis for lead antibiotics. ‘The PhD project afforded me the opportunity to develop different expertise and explore a new research interest. The development of new antibacterials locally will make these drugs cost effective and affordable for the majority of South Africans and possibly avoid importing more expensive drugs from abroad. If developed into effective antibiotics, these drugs will also help boost South Africa’s economy by possibly developing small drug manufacturing plants in South Africa, creating jobs and helping alleviate poverty,’ said Govender.

Currently lecturing in the School of Chemistry and Physics, Govender is grateful to her supervisor Professor Neil Koorbanally for his expertise and guidance during her PhD studies. She acknowledged Chemistry Discipline staff for their constant support during Teshan’s illness and subsequent passing on. She thanked her parents, siblings, husband, son Sherwyn Chester as well as extended family for the love and support shown to her throughout her studies, emotional struggles as a result of her son’s passing as well as successes.

‘Patricia was an extremely focused and dedicated student who did extremely well amidst some very trying times in her personal life and juggling both a teaching load and PhD project,’ said Govender’s supervisor, Professor Neil Koorbanally who is the Academic Leader in the School of Chemistry and Physics. ‘Her PhD is a reward for all the hard work she invested in the laboratory. I am proud of her accomplishments,’ he added.