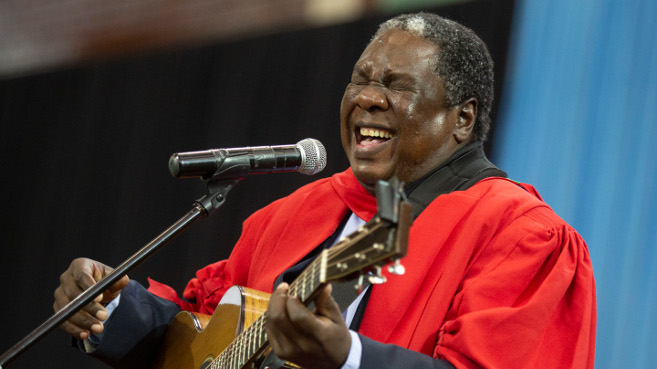 Dr Vusi Mahlasela was conferred with an Honorary Doctorate in Music from UKZN.

Legendary and socially conscious South African musician, Dr Vusi Mahlasela, who has addressed issues of social justice throughout his music career spanning over two decades, was honoured with an Honorary Doctorate in Music by UKZN for his outstanding contribution to the betterment of South African society and the global music industry.

Internationally renowned for his poetic and unique voice through which he delivers songs that carry messages of freedom and humanity, Mahlasela is a celebrated guitarist, percussionist, composer, arranger, band leader and performer who wrote songs about justice, freedom, revolution, love, peace and life during the apartheid years.

At his Graduation ceremony, Mahlasela spoke fondly about the power of music, saying not only does it have the power to nourish the soul, expand the brain, heal the sick and keep families and communities together; its power also transcends difficult times such as conflict and even death.

‘But, is music capable of doing these in South Africa which is considered the most unequal society in the world? How is it possible for music to do all these if artists themselves die of hunger from exploitation, only to be remembered and celebrated by those who (are) supposed to care for them, government in particular, when they are dead and given glowing obituaries? How do those who buy music contribute to the welfare of musicians when they purchase counterfeits in the streets? Where is the law enforcement in this regard? I’m certain that I’m not the first to pose these difficult questions. They have been asked many times before, and I suspect an inquiry will continue well into the future. But, is anyone listening, or perhaps should I say ‘who is supposed to listen?’ The answer is simply: all of us as a nation’ said Mahlasela while focusing his attention on the difficulties faced by musicians in South Africa.

He spoke about the SABC’s decision to pay needle time royalties to local music artists for songs played on its 18 radio stations for the 2014-2015 period. While Mahlasela said this decision is welcomed, he added that it raises concerns such as the fate of the galaxy of musicians exploited throughout their careers and died before the cut-off period. ‘Why the cut-off date in the first instance and what informs it? How much are musicians likely to make since the (public) broadcaster, and all other media outlets in the country, are obsessed with playing overseas music?’ he asked.

‘Controversies aside,’ continued Mahlasela, ‘The local music fraternity temporarily tasted a bit of Africa’s musical cake with the 90 percent local content playing quota. Now we are back to western cultural imposition which indoctrinates the nation to doubt or despise itself. To its credit though, the SABC has called for public submissions on its editorial policy review. Musicians can only cook, dish and enjoy this food themselves, together with those for whom they create it in the first instance, if given genuine opportunities when those who have the means can, to use the pun, put their monies where their mouths are. On this note, I call upon all South Africans in the form of citizens, government, academia and business to invest in and support the arts in a sustained, tangible and substantive manner,’ said Mahlasela.