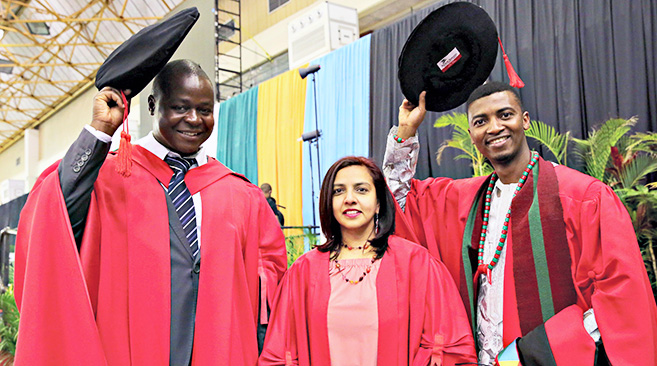 Muchono’s study probes how the cultural practice of chinamwali (an initiation ceremony for females upon marriage, where women gather to dance and share their experiences as adults) among the Shangaan people is used to construct “womanhood”. The study was premised on the understanding that the gendered practice of chinamwali socially constructs, shapes and defines women in particular Mahenye culture. The study reveals that if a woman is not “initiated” she is considered no longer “valuable in the community”, and a social outcast.

He shares that he owes this success to God and acknowledges the people of the Mahenye community, particularly the women, who shared their lived experiences, knowledge and understanding of the cultural practice of chinamwali/khomba. Muchono envisages that the study findings will not only contribute to his academic achievements, but will help in policy formulation and support the women of Zimbabwe in confronting the gendered regimes in the practice.

Muchono thanked his supervisor Naidu, saying, ‘We have walked together through this journey of my PhD studies since 2015 and I have found her to be a conscientious and courteous supervisor who assisted and motivated me in my studies. The journey was tough but she was there for me always.’

He also thanked Chief Mahenye for permission to do research in the community; his research assistant Lingiwe; his wife, mother (Lillian Muchono), siblings and in-laws for the continual support.

Darong’s study explores the experiences of People living with HIV (PLHIV) in their practice of medical pluralism, most especially how they navigate the plural systems and treatments utilised. This study was conducted at the Hlabisa sub-District, a rural area in uMkhanyakude District of KwaZulu-Natal.

‘HIV/AIDS is currently only treatable biomedically. PLHIV are expected to strictly adhere to active antiretroviral treatment (ART) prescribed by biomedical health practitioners in order to “progress” on the cascade of care. Poor progression on the cascade of care, however, has been shown to exist amongst PLHIV. The use of multiple health systems - biomedicine, traditional healing and religious healing, known as medical pluralism, has been said to be a contributing factor in the poor adherence to HIV testing and treatment,’ explained Darong.

The study found that the PLHIV in the study consciously made concurrent, parallel or sequential use of plural healthcare for various health conditions when they believed such conditions can best or only be treated using specific health systems.

The study found that some of the participants refused initiation into ART due to the attitude of the biomedical health practitioners towards the participants’ use of plural health.

‘Their health-seeking behaviours can be seen as an expression of their agency. Hence, rather than excluding them from using basic primary health services due to their plural health use, a better understanding and appreciation of their reasons, motivations, and manners of practicing medical pluralism is needed. This will aid in the development of health programmes that better cater for their health needs,’ said Darong.

His PhD journey was one that came with many unanticipated challenges. The support received from family, friends and his supervisors, Naidu and Moshabela, went a long way in enabling him to persevere through the challenging times and produce an excellent thesis, which was highly commended by the examiners.’

He acknowledged the unflinching support of his parents and family and Samkelisiwe Nxumalo, who assisted him during the data collection process. ‘The lessons learned, and relationships gained during this journey remain highly valued,’ said Darong.