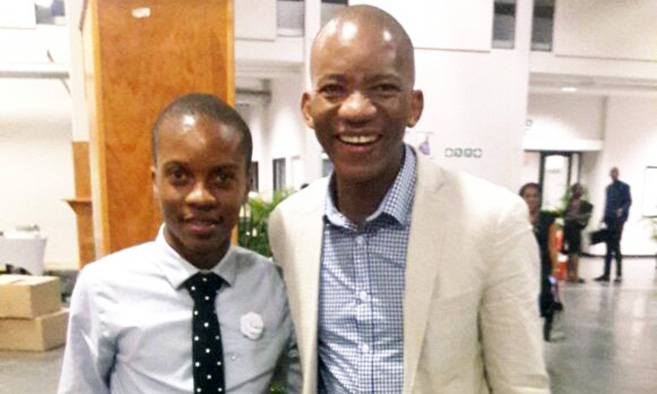 Meet final-year Bachelor of Education (BEd) student Mr Luthando Molefe. In November 2017 Molefe received recognition as one of UKZN’s top 40 most inspiring students. This was after he entered the UKZN Spotlight to Greatness Competition.

Nominated by his peers and successfully selected by the Corporate Relations Division, Molefe received the award in recognition of his sterling achievements in academia. His leadership skills in the roles he performs were also found to be striking.

Working for the Edgewood Environmental Forum (EEF), a community based non-profit organisation which educates and raises awareness about issues pertaining to environmental consciousness, afforded Molefe the opportunity to communicate with diverse stakeholders on how to transform communities surrounding Edgewood and the campus itself.

Additionally, among many other accolades he has received various Certificates of participation. Apart from this, Molefe was awarded a Scholarship by the Office of the Head of Scholarships at UKZN for his academic excellence for the 2017 academic year. In his first year of study he was recognised as one of the best performing students within the School of Education by the Fundza Lushaka Bursary Scheme. As a result he was assigned two Biological Science students to mentor. This was an innovative drive aimed at helping students who were struggling to succeed.

Humbled and extremely grateful Molefe expressed his appreciation saying, ‘I am very honoured to be awarded such by UKZN as they saw that my work is “seen” and very influential from a young person like myself. The recognition by my peers at the Edgewood campus, including my very supportive lecturers, to mention a few Dr Angela James (Academic Leader: Community Engagement) and Miss Makhosi Shoba (Education and Curriculum Studies Lecturer) motivated me to do good as they saw great potential in me.’