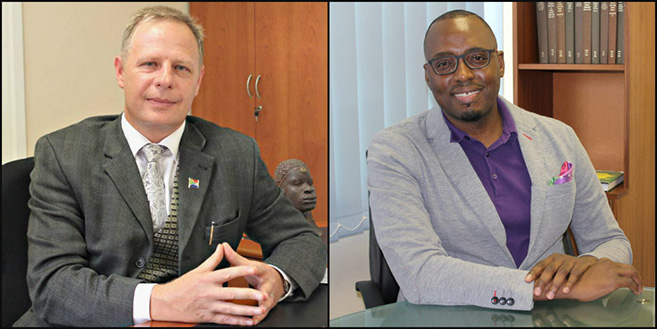 Steyn has published more than 40 peer-reviewed articles and also boasts book contributions to his credit. These have a focus on criminology, criminal justice, and related fields. Prior to joining UKZN in 2012, he was an Associate Professor with the Department of Safety and Security Management at Tshwane University of Technology, a position he held for just over a decade, and before that he was a functional member and commander in the South African Police Service (SAPS), for 10 years.

He has been the Chair of the Policing Portfolio of the Criminology and Victimology Society of Southern Africa, as well as Editor-In-Chief of the Southern African Journal of Criminology. Steyn is currently a member of the eThekwini Municipality Civilian Oversight Committee, and honorary member of several other local, regional and international bodies.

He holds a doctorate, masters and bachelor’s degree in policing, a Bachelor of Arts majoring in psychology and criminology, and a National Diploma in police management. He has received multiple awards, including Faculty of Humanities junior researcher of the year, as well as Faculty of Humanities senior researcher of the year. He has presented various papers and chaired conferences and symposia around the world. His research specialisation is police culture.

‘I’m very excited and look forward to serving the School with humility, and both preserving and advancing its sterling reputation. By the end of 2022, the School will be the South African university school of choice for the most talented applied human sciences students and scholars; renowned for delivering African scholarship, pedagogies and methodologies in its learning and teaching programmes that transform talented students into labour market prepared and empowered graduates.’

‘It will be recognised for African applied human sciences research impact, innovation, and entrepreneurship; known for its service excellence; and acknowledged as a leader in embedding sustainability and good governance in all aspects of the School’s operations, teaching and learning, research, and community engagement,’ said Steyn.

Meanwhile Professor Khalema was acting Dean and Head of the School of Built Environment and Development Studies for about one year. He also served as Academic Leader of the Discipline of Community Development. Khalema began his academic career in 2001 in Canada where he spearheaded academic and community work on migration, youth studies, political economy of sustainable development, social epidemiology, community crime prevention, community-based praxis and social and economic health of vulnerable populations.

Khalema has led and co-led numerous national and international research projects in Canada, Trinidad & Tobago, Mozambique, Brazil, and South Africa. He is a recipient of numerous research, teaching, and community awards locally and abroad.  He has published over 30 journal articles in accredited academic journals; 20 book chapters; 40 technical research reports; presented over 70 papers in local, national, and international conferences. He is also an author and co-editor of several books.

‘It is an honour to serve such a dynamic group of colleagues at the School, they are exceptional, vibrant, and committed to their crafts. The School of BEDS is one of its kind in the country with its strong interdisciplinary edge. I am looking forward to growing together and building the School,’ said Khalema.