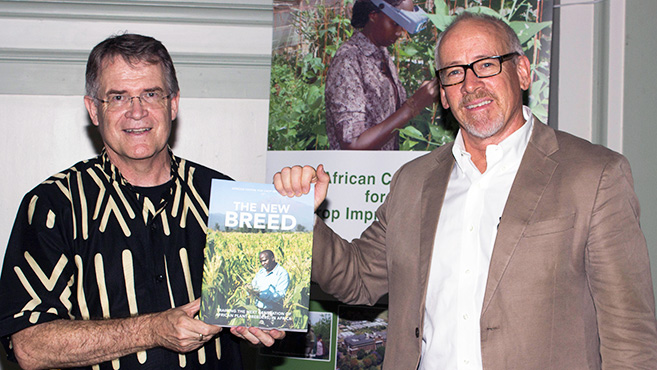 ‘The New Breed’ focuses on the concept of the ACCI and how its objectives were achieved. The Centre has focused on supervising PhD students while they conduct research in their home countries, with a period of training in South Africa.

The Rockefeller Foundation and then the Bill & Melinda Gates Foundation (BMGF,) through the Alliance for a Green Revolution in Africa (AGRA), have funded the ACCI since 2002. The Centre has graduated over 100 plant breeders at PhD level, with 29 PhD students still in training. ACCI graduates have released over 140 new crop varieties bred to be high yielding and resilient to biotic and abiotic stresses, and published over 200 publications so far.

‘The ACCI transformed us into what we are: true African plant breeders,’ said Dr Albert Changaya, an ACCI graduate, now a senior scientist in Malawi.

‘This has been a sea change in terms of the way people look at agriculture in Africa, in the belief that African scientists can make something much more out of its farming community and agricultural sector,’ said Dr Joe DeVries, Vice President of AGRA and one of the ACCI’s founders.

DeVries also credited UKZN academics and staff who have made ACCI a success.

‘It has been a tremendous journey,’ said DeVries. ‘There is a genuine difference between today and 15 years ago in the African agricultural sector.’

‘A project of this scale and this international nature in plant breeding had not been tried anywhere before,’ said Laing, Director of the ACCI, who emphasised the importance of researchers actively engaging with small-scale farmers and developing their own soft skills.

ACCI has made a name for UKZN at institutions and universities across Africa. In the preamble to the publication, UKZN’s Vice-Chancellor and Principal Dr Albert van Jaarsveld describes the ACCI as one of UKZN’s “leading success stories”.

At the launch, College of Agriculture, Engineering and Science Dean of Research Professor Kevin Kirkman said that ACCI has developed a successful model that the University could replicate in other disciplines.

ACCI has its final AGRA-funded cohort of eight PhD students in the field, due to graduate in four years. Changes in funding organisations mean the ACCI will be adapting the scale of its programme to match these changes.

ACCI saluted AGRA, the BMGF and the Rockefeller Foundation for their support over the past 15 years.

An eBook version is available from the ACCI website. A limited number of hard copies can be purchased from ACCI. For more information email: Acciadmin@ukzn.ac.za