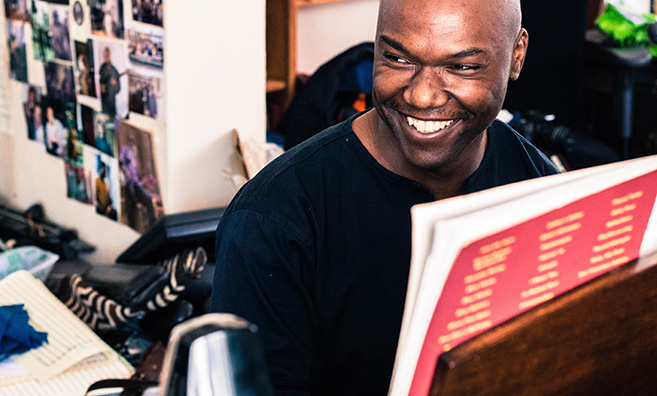 UKZN Music Lecturer Sibusiso Mashiloane who will perform with his band at UKZN’s Centre for Jazz and Popular Music from 6pm on Wednesday, 7 February.

UKZN’s Centre for Jazz and Popular Music features Music lecturer Mr Sibusiso Mashiloane and his band in a performance titled ‘Rotha: A Tribute to Mama’ on Wednesday, 7 February.

Pianist and composer Mashiloane released his second album - Rotha: A Tribute to Mama - last year and has been performing music from it throughout South Africa and in Mozambique.

The music on the Rotha album is a tribute to cherished and influential figures, experiences and memories in Mashiloane’s life but most importantly to his mother Rotha, who died in 2016 while he was in studio recording the album.

Discussing Mashiloane’s recent Cape Town performance, Carol Martin of All Jazz Radio said: ‘The sounds were raw and danceable, persistent, then mellowing. Mashiloane’s leadership takes one on a journey of cadences with tones of African rhythm and blues Zulu-style and fused with swing-bop, hip-hop, gospel and funk. Often, a blues-rock unfolds, then Mashiloane’s piano sets the fast pace, and finally, crescendo!’

‘I have a long-term view of conscientising Africans about the value of their own works and aim to breed a new decolonised generation of musicians, music collectors and live music audiences who will pride themselves about their own African heritage,’ he said.

Entry to the performance at the Centre for Jazz and Popular Music (CJPM) on Level 2, Shepstone Building on UKZN’s Howard College campus, costs R80 which reduces to R50 for pensioners and R25 for students with a student card.