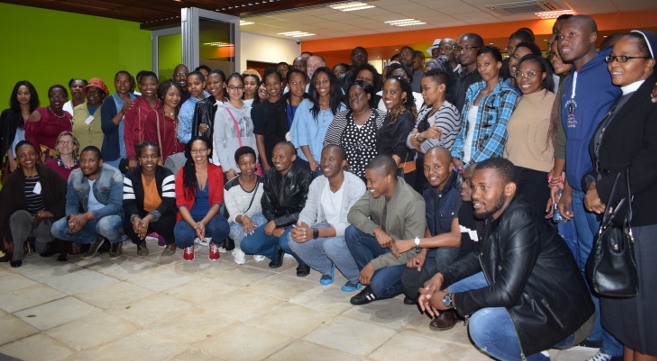 Homestay students with their host families.

Final-year Medical students celebrated the completion of a rural ‘homestay project’ with their ‘adoptive parents’ at the College of Health Sciences (CHS).

Known as a ‘rural block’ and co-ordinated by the Discipline of Family Medicine, the project involved students spending six weeks at rural sites as part of a decentralised training programme.

They had an opportunity to choose to actually live among the community for the six- week period of the project which investigated the use of homestays and whether they were a viable option for alternative accommodation for health sciences students.

‘We wanted to see whether homestays serve as a vehicle for community embeddedness for the students and also to explore whether opportunities exist, as a result of the project, for community development activities in support of the social accountability imperative,’ said the CHS’s Head of Family Medicine, Dr Bernhard Gaede.

The project began in August 2015 with the identification of four rural sites in the vicinity of the Church of Scotland in Msinga, St Andrews Hospital in Harding, the Bethesda Hospital in Ubombo and the Mseleni Hospital in a remote area of northern KwaZulu-Natal.

Suitable host-families, found close to the hospitals, received funding for accommodating the students.

Gaede said 45 out of 211 final year students in 2016 chose to do homestays and this increased to 105 out of 195 students in 2017. ‘A number of students had to be turned down due to the lack of available accommodation in the community.’

The year-end gathering at the College was attended by the host ‘parents’ from the four sites as well as students who stayed in the community during their ‘rural block’.

The students and their host parents exchanged gifts and took ‘selfies’.

Gaede spoke on the homestay project and the plan for the future while students recounted some of their experiences while living in the communities.

It was obvious that warm and close relationships had developed between the hosts and the students involved.

One of the students introduced himself as Dr Lande-Gumede – Lande being his own surname and Gumede that of the family he lived with for six weeks.

One of the host-mothers said: ‘I now have six children who are doctors!’