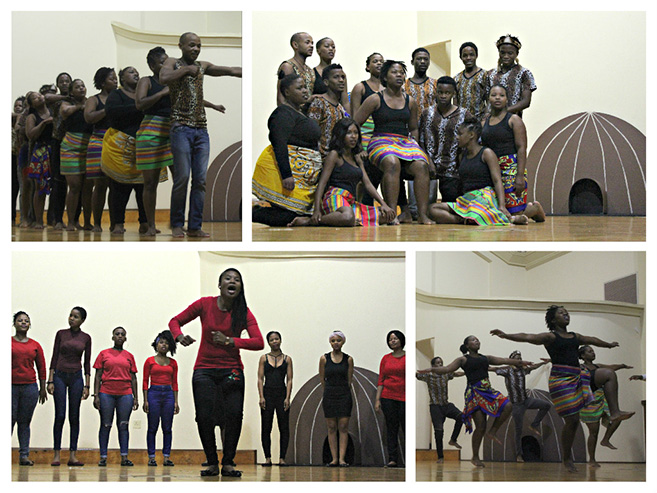 The second part was the work of AMD Ensembles 1, 2 and 3 under the theme: Tihosi Tavakhali. This is a Tsonga statement describing the contributions made by the olden day kings and queens towards the liberation of Africa.

The three ensembles presented a diverse repertoire drawn from pipes, dances and percussion rhythms taking the audience through a memorable celebration of the Tihosi Tavakhali ensuring that the legacy of the kings and queens lives on.

The concert kicked off with exciting compositions performed by the first-year class, with highlights being the performances by outstanding soloists Siniko Majozi and Thabsile Nkosi. Majozi led in his composition Zangena Izinsizwa – “Men have entered”, which has now become a favourite piece in the ensemble.

The energy peaked with the performance of Nu Luthuli’s well-choreographed composition Abafana Bodumo – “The famous boys”. The first set was brought to a close by the powerful soprano Thabsile Nkosi leading one of Luthuli’s compositions Sebehlasela Umoyo Wam – “They are provoking my soul”.

Other highlights of the concert included the Ngalanga dance which is one of the Chopi traditional dances; the Nondje, a traditional dance of the Makonde people of the North of Mozambique and a scintillating percussion piece inspired by West African rhythms.

AMD Module Co-ordinator Dr Patricia Opondo said, ‘The 2017 AMD1B class of 31 students is the largest to date, an indication of the growing interest in the AMD programme. During the students first year of studying AMD, we encourage and develop their interest in composition and choreography. Seeing the great talent exhibited, we featured four of those compositions in the year-end Lunch Hour Concert as a way to showcase this talent and also grow students’ confidence performing on stage and in front of the public.’

Continuing, she said, ‘The isicathamiya teacher is Nu Luthuli, an award winning performer and composer. I congratulate him on his outstanding work with the first-year students and we look forward to their continued growth over the next years. I also congratulate Albert Chemane who directs AMD Ensembles 2 and 3, especially with the work showcased by Ensemble 2.

‘Chemane is one of our most valued ensemble teachers in the programme because of his diverse talents as a respected percussionist and how well he works with dancers, beautifully marrying the AMD experience.  The choreography in his pieces performed, directed the students to explore new rhythms and aesthetics in Tsonga repertoire from Mozambique, quite different from the Zulu material they’re most familiar with.’