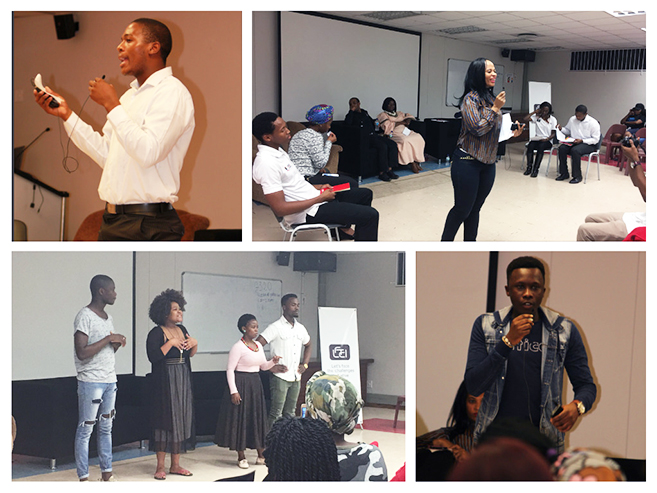 Highlights from the public debate.

The Let’s Face The Challenges Initiative (LFTCI), a recognised club and society on UKZN’s Edgewood campus, recently held a programme on bullying and assault. Titled: Bullying and Assault; What are we going to do about them? The event included a debate to allow for various views on the issues under the spotlight.

LFTCI is a registered NPO, founded by Mr Kemi Adebayo, a PhD student in Education and is headed by various students who assist with planning and the implementation of student-based programmes that aim to help the youth face various challenges.

It is a self-funded organisation that aims to gather as many sponsorships and donations to achieve its mission and vision of “raising productive and responsible youth that can face and conquer the modern days’ challenges”.

More than 200 students, academics, and support staff participated in the event. It started off with a very believable drama act on assault and bullying. The drama captured the theme of the day while also enlightening all those who were present.

The team supporting the motion said that the youths are doing nothing because bullying is not only about violence but verbal, social and cyber. They argued citing cases like exclusion of a student from a group study by other members of the group, calling people derogatory names, sending of horrific videos on social media of other youths and the initiation of new/first year students into the schools and universities where they are oppressed and made to do chores for the seniors.

The opposing team stressed that the youths were actually doing something about assault and bullying but the enormity of the issues is not making us see the efforts that youths are making. They argued that students report cases of assault and bullying to the RMS (University security); where cases are opened and investigated. They also added that youths sometimes do marches against the scourge among other points highlighted at the debate.

Lecturer, Mr Eugene Marais said, ‘Very interesting programme, I have never seen anything like this before. It was as if everyone; the speakers, entertainers, organisers were paid to put together this event.’

Mr Perfect Mdepha, one of the debaters added, ‘A successfully organised event with mind blowing topics that concerned how to deal with bullying and violence. This sort of programme or initiative should not end in Edgewood. It must be widespread to many communities.’

While Mr Kemi Adebayo, founder and secretary of the LFTCI Edgewood Branch said, ‘We thank everyone; the academics and students that attended our event. We hope to get sponsors so that the programme can be done on a bigger scale.’

LFTCI has held programmes like Exam Tips and Learning Styles, a Motivational Talk on the 10 current Challenges facing SA youth and a series of motivational presentations on radio in the last two years.

LFTCI is run by students for students and is set to continue investing in such programmes in the near future and hopes to tackle challenges faced by students through creating platforms for opinions and problems to be voiced and heard in an open and trustworthy manner.