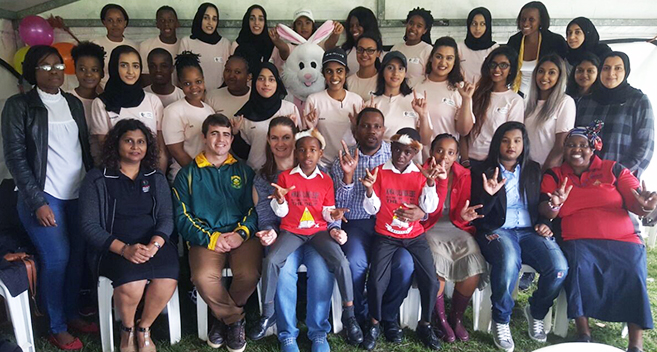 The aim of the event was to commemorate the Deaf Awareness Month which is celebrated internationally during the month of September.

The event also aimed to raise public awareness on issues that deaf people face daily as well as to honour the history and culture of people who are deaf or hard-of-hearing.

The students held a career expo and sports day with the aim of empowering learners with hearing loss to achieve their goals and to encourage them to aim for success.  The theme for the campaign was: “I’m DEAF…What’s your superpower?”

The learners participated in a variety of sporting codes including sprint, relay, tug of war, sack race, three legged race, balloon race, dribbling race and an indigenous game. Attended by 50 learners and 10 teachers, the programme boasted a number of quality speakers and role models for the children. The speakers related their success stories and provided the learners with information regarding future career paths.

The speakers included Mr Mark Bernard, a hearing impaired rugby coach at Livingston School and a player for the South African Deaf Rugby Union; the Director of Deaf education at DEAFSA, Odette Swift; a Graphic Designer at Vodacom who has had hearing loss since the age of four, Ms Raisah Hoosen; a Job Placement Officer at the KZN Blind and Deaf Society, Mr Alphonce Lehasa and a Social Auxiliary Worker at the KZN Blind and Deaf Society who was born deaf, Ms Gugu Ntini.

The event was organised by the entire fourth year Audiology class.