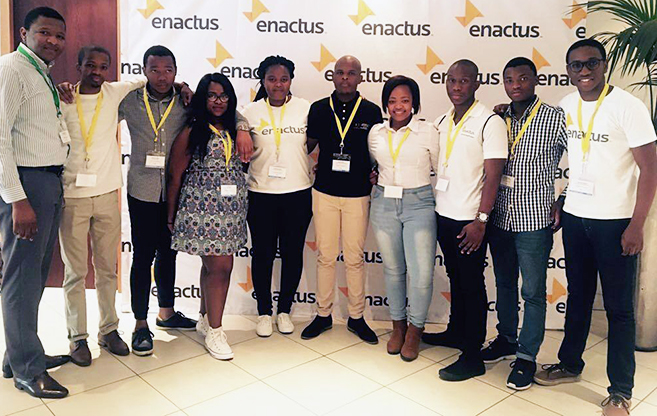 The UKZN chapter of Enactus has recently apponted its executive for the 2017/2018 year.  Enactus UKZN had its AGM on 9 September, on the Westville campus. The outgoing executive of 2016/2017 reported on their term of office, the challenges they faced and their achievements.

During the AGM, the 2017/2018 Executive team was announced and the leaders of the various portfolios in the executive accompanied by their Faculty Advisor are as follows:

These members will be leading Enactus UKZN until 31 August 2018. As they start to their term they will be recruiting additional members to their team. Recruitment will take place from 26 September until 05 October 2017.

Enactus is an international non-profit organisation that brings together students, academic and business leaders who are committed to using the power of entrepreneurial action to improve the quality of life and standard of living for people in need. The experience not only transforms lives, but also helps students develop the kind of talent and perspective that is essential to leadership in an ever-more complicated and challenging world. Enactus has established one of the largest global business and Higher Education network in the world. This unique network brings together the knowledge of professional business educators and the expertise of business leaders to focus the potential of university students preparing for leadership roles in business.

Enactus UKZN started in 2003 with only three members, two projects and one campus under the leadership of Thami Zondi. It has grown significantly since its inception and now boasts a membership of over 100 UKZN students on four of the University’s campuses, namely Edgewood, Howard College, Pietermaritzburg and Westville. The UKZN chapter of Enactus has also been crowned as National Champions five times. Therefore, this enabled the team to participate in five Enactus World Cup Competitions against international teams.

One of the biggest achievements in the 2016/2017 calendar for Enactus UKZN was being chosen as finalists and semi-finalists in three of the Special Competitions the team had entered, namely the Barloworld Social Innovation Youth Awards (BSIYA), MTN SA Foundation ICT Enactus Challenge and the Unilever Zero Waste for Job Creation Challenge.

As Enactus UKZN is currently working on a total of eight projects, putting in the hard work and ensuring that we empower our beneficiaries. The projects Enactus does vary from agriculture to technological projects. One of the projects is Jonga Phezulu, The Jonga Phezulu Agri-Hub Farming Program intends to cultivate a culture of sustainable food production using a variety of innovative farming technologies; such as new age systems specifically aquaponics and hydroponics. The program seeks to involve and significantly impact a very wide range of students from different faculties through skills transfer and their direct involvement in every aspect of the program.

The principal objective of this project is to combat the issue of food insecurity and student hunger within the University.  Another one of our projects is uMtate Wamabomvu, Enactus-UKZN was drawn to the area of uMsinga and desired to bring assistance where possible after the area had been hit by floods. It was then the Enactus-UKZN team was introduced to a co-operative of about 231 women called INgqalazi cooperative with land of 66 hectares in size. They practiced vegetable farming along the uTugela river banks as a means to help alleviate poverty. In 2015 Enactus UKZN introduced the Kandu App to the project which is focused on introducing the famers of uMtate Wamabomvu to the national and even international market since the market of uMsinga is very saturated. Since the project began, the beneficiaries have an active and ongoing contract with Edde memme which they supply soya beans to. Currently the farmers are emerging from substance to commercial farmers.