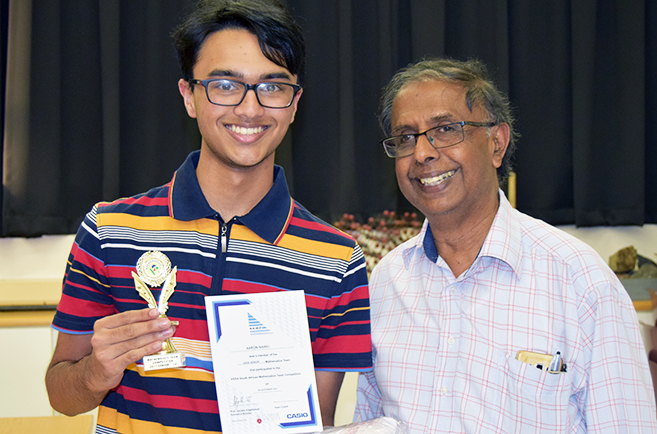 UKZN finished in 6th position in the junior section and 10th in the senior division.

Since 2011, the Siyanqoba programme, which is the brainchild of UKZN Emeritus Professor Poobhalan Pillay, has assisted high school students to do well in the South African Mathematics Olympiads. ‘Hundreds of learners have benefited from the programme,’ said Pillay.

This year, Grade 10 Eden College pupil Aaron Naidu finished in the top 10 nationally in the final round of the South African Senior Mathematics Olympiad and represented the country at the International Mathematics Olympiad in Brazil in July, where he received a special award for outstanding performance.

Naidu won the South African Junior Mathematics Olympiad in 2015 and 2016.

Pillay thanked various people involved in making the SAMF event a success, including the College of Agriculture, Engineering and Science, the Actuarial Society of South Africa, Casio, the SAMF and lecturers and coaches from the School of Mathematics, Statistics and Computer Science.

Former Head of School, Professor Kesh Govinder was the guest speaker on the day.  He was joined by Professor Dharmanand Baboolal, also an Emeritus Professor in the School, who commended Pillay for his passion in promoting Mathematics among school goers.

Words and photograph by: Sally Frost