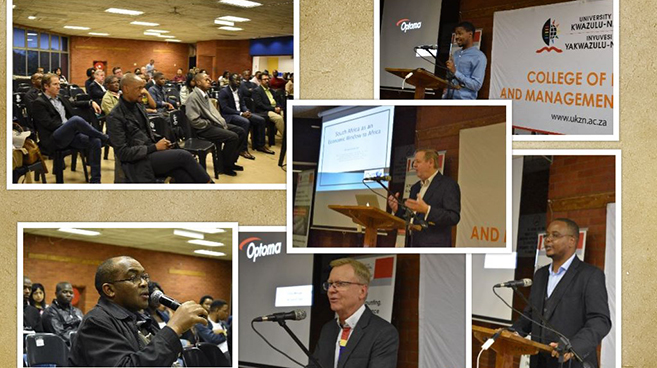 Bringing the World to Africa

The Global Shapers Community, a network of young people driving dialogue, action and change, boasts 6 666 Global Shapers, in 378 hubs, in 155 countries, all looking to impact lives on a global scale.

Billed as an Open Africa Initiative, the seminar included a presentation by the Chairman of Oakbrook Holdings, Mr Terry Rosenberg, who is a non-executive director of 10 companies, including the Sharks rugby franchise.

Rosenberg outlined his business dealings in Africa which include facility site services providing food and housing for massive projects such as oil refineries.

He emphasised the importance of ‘building the community where we find ourselves’, citing a project they are working on in Pemba, Mozambique, where local people are employed as well as skilled professionals. Locals are taught farming techniques to ensure they become self-sufficient, even when the project ends.

Extolling the importance of upskilling and training people, he said: ‘Make sure that you don’t set people up to fail.’ He underscored the importance of attitude and skills when employing people: ‘You can’t do it all on your own, you need people around you with the right skills.’

Rosenberg spoke out strongly on corruption: ‘If someone wants a brown envelope, they are not going to get it from us!’

Dr Richard Cookson, with more than 30 years of business experience, spoke on the concept of Geographic Economic Windows (GEW), examining South Africa’s potential to become a conduit into Africa.

Explaining the GEW concept, Cookson cited Cape Town which previously served as a springboard for the Dutch to access Asia. He explored GEW throughout history, including Finland, which is an economic bridge to Russia; and Hong Kong which has facilitated access to China.

He said features crucial to the success of GEW included the ability to adapt, good international banking systems, free capital flows (no exchange control) and a solid performance in the indices.

Professor Mabutho Sibanda of the School of Accounting, Economic and Finance said the Open Africa initiative was an ‘opportune time to discuss problems of mutual interest with the aim of providing solutions to some of the problems relating to trade, economic, cultural and regional integration Africa is facing’.

Sibanda said the initiative fitted well into the broader mandate of the University in ‘Inspiring Greatness’, especially among the next generation of leaders.

The Curator for the Durban Global Shapers, Mr Nkululeko Mthembu, said they see themselves as the ‘next great leaders,’ looking to challenge the ‘idea of Africa being a brand.’

Mthembu said they decided to ‘bring the brightest minds of Africa’ together to discuss the Open Africa Initiative.

Global Shapers’ Mr Sibonelo Gumede served as programme director at the event which was co-hosted by the Durban Global Shapers and the College of Law and Management Studies.

Words and photograph by: Raylene Captain-Hasthibeer