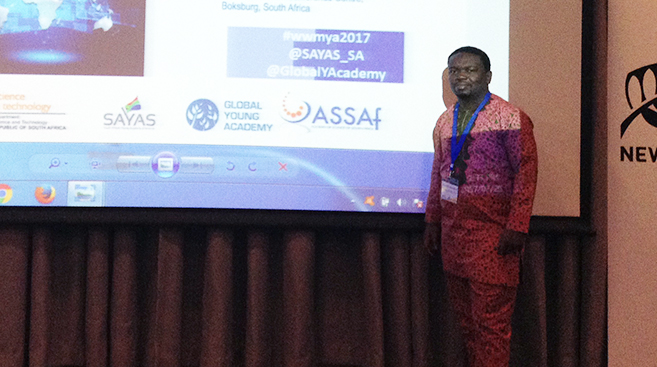 The first was the Worldwide Meeting of National Young Academies held in Johannesburg, and the other was the Nigerian Young Academy of Science Conference in Nigeria.

A full grant from the Academy of Science of South Africa (ASSAf) enabled Erukainure to attend the Johannesburg event while a Knowledge, Interchange and Collaboration (KIC) travel grant from the National Research Foundation (NRF) got him to the other meeting.

His presentations centred on his PhD research concerning the toxicological effects of some commonly used African medicinal plants in the treatment of type two diabetes. He is aiming at not only scientifically validating the folkloric antidiabetic claims of the medicinal plants, but also identifying the toxicological effects associated with their use.

According to Erukainure, the meeting hosted by the South African Young Academy of Science (SAYAS) and co-organised by the Global Young Academy (GYA), offered representatives of National Young Academies (NYAs) from more than 45 countries the opportunity to exchange experiences and activities, network and plan future collaborations.

‘Key factors affecting research were highlighted, especially for scientists in developing countries,’ said Erukainure. ‘The profiled solutions will be communicated to representative NYAs by delegates during their annual general assembly this year.’

He says attending the meetings brought fulfilment and a sense that his research is appreciated, as well as motivating him to work harder.

Erukainure’s supervisor, Professor Shahidul Islam, lauded his student for his achievements. Erukainure has been part of Islam’s laboratory for just over a year and already has four research papers under review.

In his home country of Nigeria, Erukainure has produced more than 80 publications based on extensive investigation conducted over his eight-year career in research and development in medicinal chemistry, toxicology, oncology and functional foods development. He is ranked among the top 500 scientists in Nigerian institutions, received an Award of Excellence in Research and Development from the Federal Institute of Industrial Research, Oshodi (FIIRO), and was selected by the New York Academy of Sciences (NYAS) as a Member–Ambassador.

Erukainure chose to pursue his PhD at UKZN after conversations with colleagues at UKZN, and was attracted by the research interests and achievements of his supervisor. He received his Bachelor of Science, Honours and Master’s degrees in Biochemistry from Babcock University and the University of Ibadan. He hopes to progress to postdoctoral research following graduation and continue his career in research and development.

Erukainure credited his parents for instilling a belief of hard work in him and his siblings. He also thanked Islam for his supervision and sound advice, and his wife, Isoken, and daughter, Zoe, for their support and understanding.

He acknowledged his mentors Dr Gloria Elemo of FIIRO, Professor Osaretin Ebuehi of the University of Lagos, and Dr Barbara Doonan of the New York Medical College and NYAS. He also thanked fellow members of the Biomedical Research Laboratory at UKZN for their support.