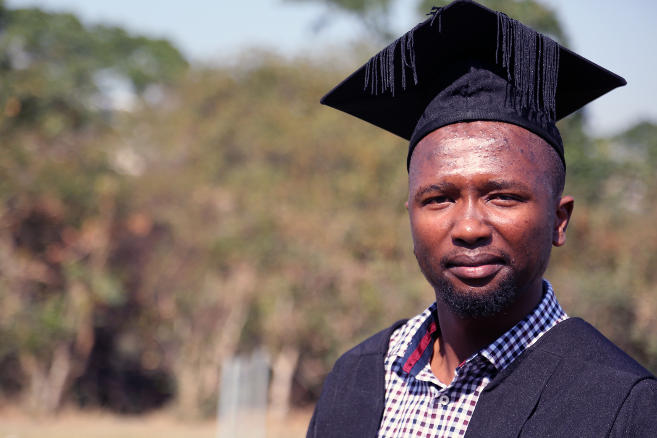 Mr Zibusiso Hlongwane who obtained his MSc for statistical work done on water quality in the Umgeni supply system.

Mr Zibusiso Sandile Hlongwane received his MSc degree in Statistics for research done to find the statistical methods or techniques to model the rare occurrences of microbiological organisms (Heterotrophic bacteria, coliforms and E. coli) that exceed the acceptable standards limit as well as their relationship with some exposures of interest in the Umgeni Water supply system.

Hlongwane began his Higher Education studies in UKZN’s Science Foundation Programme in 2010. He found the programme very challenging but highly rewarding and said it encouraged him to put extra effort into his work. He developed problem-solving skills and was thrilled that the programme had helped him complete his undergraduate degree on time.

Drawn to statistics by his appreciation for elegant methods of formulating problems and finding real solutions, Hlongwane obtained his BSc in Operations Research majoring in Applied Mathematics and Statistics, and his BSc Honours in Statistics. He overcame the hurdles of a lack of finances for his studies and the strain of learning to manage his workload to be where he is today.

He enjoyed the peaceful location of the University, the friendliness of its staff and the opportunities to network and interact with colleagues.  While studying at UKZN, he also tutored students in Mathematics and Statistics.

Hlongwane’s research involved modelling microbiological count data, which is a continued challenge for researchers. He used Umgeni Water sites, namely Midmar and DV Harris, where he worked to find models that can adequately be used to model the microorganisms that are rarely found in drinking water and then compare the performance of the best models.

Hlongwane explained that at both sites used, most samples had zero counts resulting in highly skewed and zero-inflated data, justifying the use of statistical models that can adequately account for excess zeros in the analysis.

‘Statistical inferences based on such data are likely to be inefficient or wrong unless careful thought is given to how these zeros arose and how best to handle them,’ said Hlongwane.

Hlongwane was excited by the opportunity to apply statistical models to microbiological data, and said the study enabled him to unite his intellectual and creative interests. He is considering going on to a PhD in Statistics, where he hopes his research will have impact in his areas of interest, which include developing new statistical models for zero inflated data and data analysis using statistical software.

In 2016 he presented a paper titled: Zero-Inflated Regression Models with Application to Water Quality Data from Umgeni Water, at the Water Institute of Southern Africa (WISA) Conference in Durban.

He thanked his mother, Mrs T Hlongwane, who supported his efforts and his supervisor, Professor Henry Mwambi, for expert advice, invaluable input and especially his time, which provided Hlongwane with the motivation and assistance to persevere with his studies.