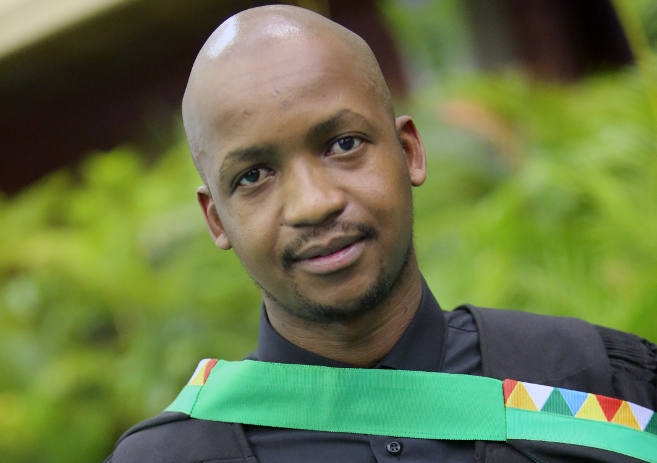 Mr Thabo Lephoto was awarded an MSc in Statistics degree for his time series analysis of microbiological counts found in treated water from Umgeni Water.

Lephoto used data going back over the past 24 years about water quality variables and environmental factors to find a relationship between the two.

Originally from Vrede in the Free State, he initially hoped to pursue his tertiary education closer to home but when he was not accepted at universities in Gauteng and the Free State, he approached UKZN where several opportunities opened up for him through the Central Applications Office (CAO).

He enrolled in UKZN’s Augmented Programme, which he says revived the hard worker in him. He had to acclimatise to the academic environment and believes the programme pushed him to work hard.

Lephoto progressed from being in the Augmented Programme to earning distinctions for coursework in 2014. He also assisted high school learners in the Pietermaritzburg district with their school work through a tutoring project during his studies and since 2014 has tutored first and second-year statistics students at UKZN. He seizes any opportunity to help postgraduate students from other disciplines with statistical data analysis.

His Masters research gave him the chance to work closely with staff at Umgeni Water, where he analysed and gave monthly progress reports.  ‘The interactions with the Umgeni Water staff helped me critique my research and methodology,’ he said.

Lephoto said that dealing with real data gave the research real-world impact and made him feel his work was useful. He enjoyed the multidisciplinary aspect, making the most of the opportunity to learn about microbiology.

‘As a young statistician, it’s exciting to see that all the theory you learned in class can work and bring about change or contribute positively to real life problems,’ said Lephoto.

He thanked his mother, sisters and family members for their constant support as well as his supervisors Dr Oliver Bodhlyera and Professor Henry Mwambi for encouraging him to pursue his own research while steering him in the right direction when necessary. He also thanked Ms Christel Barnard in the School of Mathematics, Statistics and Computer Science for her administrative support