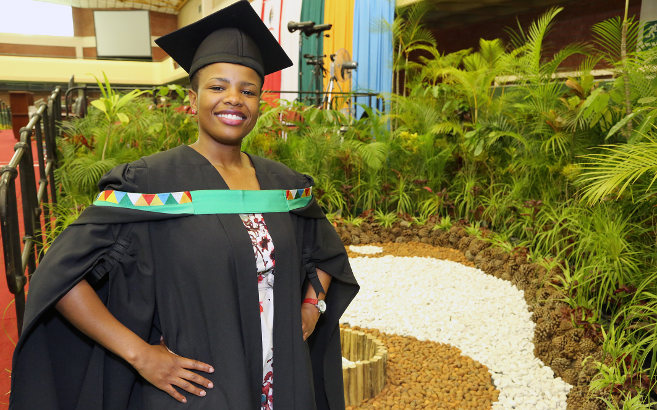 Research into what urban Black boys at high schools prefer when it comes to the body size of women earned a UKZN student a Master of Science in Dietetics degree.

Ms Primrose Gcinani Manyathi aimed to establish what role such preferences have with regard to the high prevalence of obesity among urban Black South African women.

Manyathi examined the preferences of boys when their mothers, sisters, girlfriends and future wives were involved, identifying the Body Mass Index (BMI) that represents these choices.

‘The causes of obesity are complex and interrelated,’ said Manyathi. ‘Though some of the causes have been researched in South Africa, not enough researchers have looked at how the Black male preference for particular female body shapes influence this prevalence.’

Her findings indicated that urban Black boys at high schools preferred a normal BMI for their sisters for health reasons, but that changed for a girlfriend and/or future wife where the choice was for ‘a normal weight to an overweight shape’ with sex appeal being cited as the predominant reason for this.

Manyathi says the results require further investigation among Black men during later stages of their lives to get the full picture of body size preferences.

Manyathi, who has always been interested in science and food, attended Vryheid Comprehensive Secondary School. She enrolled in UKZN’s Science Foundation Programme, which, she said, gave her insight into how the University functioned before she was fully accepted into the Dietetics programme.

She appreciated the many programmes UKZN had to help students from different backgrounds, as they were vital in helping those willing to do their part and work hard.

Manyathi thanked God for providing her with parents who strongly believed in sending their daughters to school, and for giving her sisters she could look up to - two of whom have Master’s degrees in different disciplines. She also thanked her supportive and objective supervisor, Dr Susanna Kassier.

‘Last, but not least, I want to thank UKZN for giving me the amazing opportunity to study,’ said Manyathi, who aims to go on to do a PhD in Food Security next year.