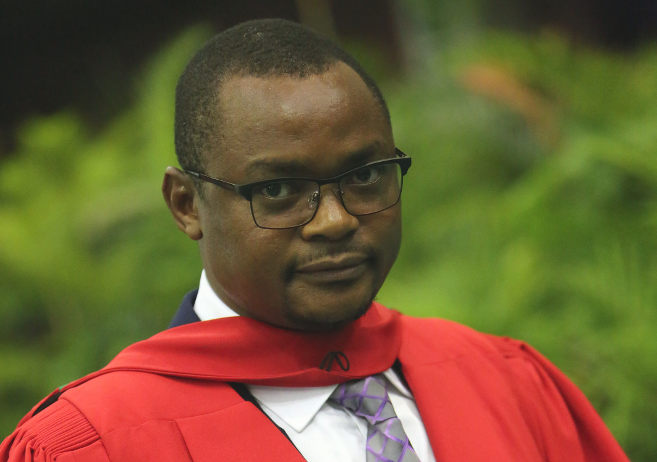 A Lecturer in the School of Mathematics, Statistics and Computer Science (SMSCS), Dr Oliver Bodhlyera, has graduated with his PhD in Statistics after conducting a study on the development of statistical models for optimally sorting raw materials for processing, specifically timber genotypes for chemical pulping.

To conduct his research, Bodhlyera statistically sorted timber genotypes into compatible groups able to be chemically pulped together. He used four related statistical methods to sort the materials and successfully developed a materials mixing criterion and identified timber genotypes that can be mixed optimally during chemical pulping.

‘This is a statistical look at chemical processes, with a view to optimising the mixing of different raw materials that feed into such processes,’ said Bodhlyera.

The research findings, he believes, can help in the production of products with consistent quality, even when made from raw materials obtained from varying sources.

Bodhlyera, originally from Mutare in Zimbabwe, has been at UKZN since 2008, drawn to the Institution because of its reputation for academic excellence.

Bodhlyera said he enjoyed the vibrancy of UKZN’s well-resourced academic activities grounded by well-established management systems and well-defined principles and goals. Bodhlyera has also enjoyed the hospitability of the Pietermaritzburg community.

He credited staff in the Discipline of Statistics at UKZN for their support, particularly Professor Delia North for ensuring that he settled in well, and his supervisors Professor Temesgen Zewotir and Professor Shaun Ramroop, who helped shape his study, based partly on Zewotir’s work. He credited his supervisors for providing guidance and moderation and also thanked Dr Viren Chunilall at the Council for Scientific and Industrial Research (CSIR) Forestry Products Research Unit in Durban for assistance with data generation.